Massachusetts officials applauded the guilty verdict issued Tuesday in the murder trial of fired Minneapolis Police Officer Derek Chauvin for the killing of George Floyd, the Black man who died after he was pinned to the pavement with Chauvin’s knee on his neck last May. While the elected leaders said justice was served in the case, the politicians stressed that the nation still has work to do in addressing systemic racism in America.

Chauvin was charged with second-degree unintentional murder, third-degree murder, and second-degree manslaughter. The verdict was reached after about 10 hours of deliberations by the jury over two days.

The jury found Chauvin guilty on all charges.

Below, what Massachusetts elected officials are saying about the verdict in the case.

“Eleven months ago, Minneapolis Police Officer Derek Chauvin subdued and handcuffed George Floyd, and then knelt on his neck for over 8 horrific minutes.

Since then, many states and municipalities, horrified by the viral video of George Floyd’s death, have enacted significant law enforcement reforms – including here in Massachusetts.

But for many, the most important unanswered question since that awful night has been much more personal: Where is the justice for George Floyd – and for that matter, Officer Chauvin?

Nothing can reverse the pain, suffering and agony of George Floyd’s family and friends, but this decision does make clear that Officer Chauvin was not above the law. He was given a fair trial, found guilty, and he will pay a price for his actions.

But as the countless, tragic events that took place at the hands of law enforcement before and after George Floyd’s death make clear, there is much to do to correct, reform and reimagine the way law enforcement officers are trained, and how they and their departments are held accountable for their actions.

Massachusetts enacted one of the most comprehensive police training, transparency and accountability laws in the country at the end of last year. We owe it to all those whose lives have been lost to do all we can to successfully implement that law, and sustain its aspirations far into the future.”

George Floyd should still be alive – and we must keep fighting to dismantle systemic racism and fundamentally transform our justice system.

George Floyd’s life mattered. Today’s verdict delivers accountability, but it does not bring him back. Our country must atone for the shameful, racist policies that have denied and stripped Black Americans of their rights for generations.

We must do more to hold law enforcement accountable. Abolish qualified immunity. Demilitarize the police. Ban facial recognition surveillance. And so much more. Today is only one step in the long march to true justice for Black and Brown Americans.

I am thankful for this verdict, but George Floyd should be alive today. We have so much work to do as a nation to deliver true justice for George Floyd, his family, and all Black and Brown Americans.

Black men, I love you, and you deserve to grow old.

The officer who murdered George Floyd was held accountable. But accountability won’t bring back Mr. Floyd or return him home to his precious family. Our fight for justice demands systematic & fundamental change—on behalf of Mr. Floyd & countless others lost to police violence.

As a former DA who worked with victims of violent crime for decades, I realize that this verdict won’t bring “closure” to George Floyd’s family. I do trust however that it will bring a sense of “justice” to his family & to all of us who value our basic civil rights & rule of law.

True justice would look like George Floyd still here with us today, but this verdict is proof that police officers are not above the law, and that Black lives matter. pic.twitter.com/bGBim1b15h

Today’s verdict means that the officer who killed George Floyd will face justice for his horrific actions, but it doesn’t return George to his family. In his name – in his children’s names – we must continue pushing for a system that finally recognizes that #BlackLivesMatter.

Our quest for justice isn’t over. We don’t just want guilty verdicts. We want young girls like Gianna Floyd to have their fathers. #BlackLivesMatter

A reminder that were it not for Darnella Frazier, who filmed the murder of #GeorgeFloyd, we might not have received these guilty verdicts. I’m thinking of her today and the trauma she will always be forced to carry. Thank you, Darnella, for your bravery and strength.

“As a grandmother of teenage boys, as a Black woman who has felt the need to tread lightly in a world that criminalized my Blackness, as a community organizer who has dedicated my career to racial justice, as the first Black mayor and the first woman mayor of the city of Boston, I continue to pray for the family of George Floyd.

And I know the importance of the African proverb, ‘When you pray, move your feet.’ And our work here in the city of Boston must continue.

I commend the jury and the prosecutors in this case. George Floyd’s name now represents the urgency of racial reckoning and police reform across our country. While many of us breathe a sigh of relief, George Floyd and countless others are still dead, and the conditions that led to so many senseless killings still exist.

While I am truly grateful for a guilty verdict, I know that our work in our city and in every other city across America to advance racial justice continues. I encourage the residents of Boston to engage in this work with us. Doing the work to dismantle structural racism will take all of us.

I invite us to all come together to not only reimagine our criminal justice system and how we police. I encourage you to engage with us in city contracting, and housing, and education, and so many issues that need our attention. As mayor, I promise the city of Boston bold and courageous leadership.

Tonight, I stand with you, and together we will support the people of our city with meaningful dialogue, productive engagement, and collective action to advance equity and racial justice in Boston.”

Guilty.
The road to equality is long and uneven, but there was justice today. I am grateful to my fellow prosecutors and for the police who testified against Derek Chauvin. pic.twitter.com/Ma0nlh7UC0

People must realize that every time a Black person is murdered because of a non-violent interaction with police – passing a counterfeit $20 bill, selling loose cigarettes or driving with an air freshener in your rearview mirror — we all feel it. These are Misdemeanor Murders.

We need to end police brutality and racial injustice. The stakes are life and death. #JusticeForGeorgeFloyd #BlackLivesMatter

Justice would be George Floyd alive today. But at least Derek Chauvin will be held responsible. Transforming our criminal legal system remains a life & death proposition for Black residents. It should not take Black man being murdered on camera for police to be held accountable.

In Boston, we join Minneapolis & the country in feeling a drop of relief, but not justice. George Floyd should still be alive.

Our fight against police violence, anti-Black racism & white supremacy isn’t over. For George & so many others, we won’t be complacent.

This verdict is not enough. This is not justice. It’ll never, ever make up for George Floyd’s and countless others’ deaths. Let us continue the work to rid our country of its racist roots.

My heart and thoughts are with the friends and family of George Floyd. May this verdict play a role in finding them some semblance of peace.

May it serve as a catalyst towards a country where no one is above the law or escapes justice because of the uniform they wear.

This decision is justice for George Floyd and his family. This is the first step of many in our journey toward justice, and it’s such an important step we take together today.#BlackLivesMatter #JusticeForGeorgeFloyd 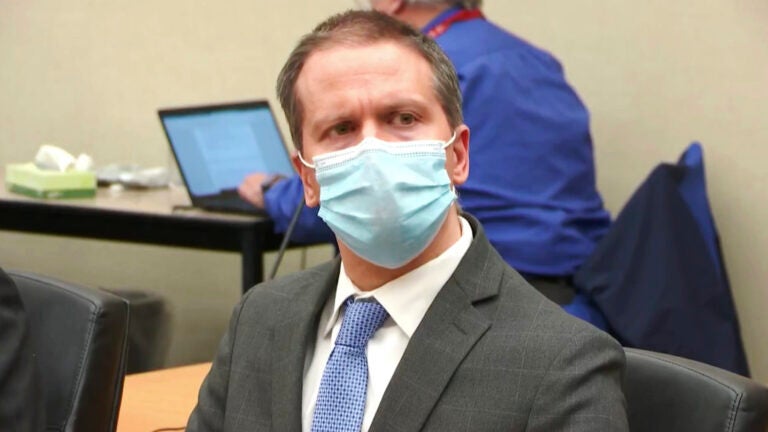