Today’s Copley Square is a product of the ’80s, and it seems the urban park is due for a makeover.

A large raised platform, a modern fountain, a new lawn, and a wide plaza are some of the landmark features in new conceptual plans for a redesign of the iconic Back Bay site.

Boston Parks and Recreation and Sasaki, the Watertown-based design firm consulting on the redesign, unveiled the plans in a presentation during an online community meeting last week. The city has set aside $15.5 million for the redesign, with construction scheduled to start next summer.

The project has been in the works since last fall in response to deteriorating conditions in the square, with officials collecting plenty of community feedback along the way.

“As a city, we ask a lot of Copley Square,” said B Chatfield, the city manager for the project, at the meeting. “We’ve got First Night there, we’ve got the Boston Marathon, we’ve got our well-loved farmer’s market, the largest one in Boston. Protests are staged here, we’ve got book fairs here, and it’s also a place where people enjoy quiet moments.”

All that heavy traffic has worn out the square, which hasn’t had a major facelift since it was redesigned in the ’80s. The lawn is in disrepair and needs to be replaced annually, the pavement is uneven, the trees are not as healthy as they could be, and the fountain desperately needs a mechanical update.

The designers are heavily focusing on the balance between everyday use and large events: They want the square to be fit for lunchtime strolls and food festivals alike.

“We heard really resoundingly from public feedback that the vision for Copley… needs to be a 21st-century space with amenities that can support 21st-century urban life, but also that it should honor its roots, and include many of the elements that are so beloved as part of the square today,” said Sasaki landscape architect Kate Tooke at the meeting.

The project is a familiar one to Sasaki, which also helmed the 1960s redesign that sunk the Copley Square and paved it over in concrete. The then-lauded design, which was typical for the era (see: City Hall Plaza), soon fell out of favor. Daily use of the new Copley Square.

The most dramatic change to the square is a large elevated deck made of durable concrete planks along Bolyston Street. It’s situated to offer clear sightlines to the historic architectural facades that flank the square: Trinity Church, Old South Church, the Fairmont Copley Plaza hotel, and the McKim building of the Boston Public Library. The paths are meant to reinforce historic connections; one connects the two churches and another mimics the angle of Huntington Avenue, which once bisected the square.

The raised platform would also protect some of the square’s struggling legacy trees by keeping foot traffic away from their roots and providing more soil underneath. Preserving the square’s existing canopy is another priority for the project, and city officials said the design would preserve roughly the same 50/50 ratio between paved space and green space that the square has today. The design also calls for a new lawn directly in front of Trinity Church and a large plaza abutting Dartmouth Street. It’s an inversion of the current square, which has the lawn away from the historic church and a small paved area in front.

Project leads say the “community front yard,” which could host picnics and yoga classes, offers a quiet buffer between the church and events in the plaza. Those events might even spill out onto the street: The wide section of Dartmouth Street between Copley Square and the Boston Public Library could be temporarily closed to create one contiguous space between the square and the library’s plaza. The plaza would have much sturdier paving that could support vendor and service vehicles and built-in infrastructure for larger events. but beyond farmers markets and public concerts, the redesign includes areas fit for everyday relaxation. There’s a shaded grove by the church and a modern fountain with ripples, falls, and built-in seating. Existing public art, like the Tortoise and the Hare sculpture by the current fountain, will be relocated with consultation from the original artists.

More information is available on the city’s project page and in the thorough slideshow shared last week. The city is seeking feedback on the concept with a survey, which is open through May 6. 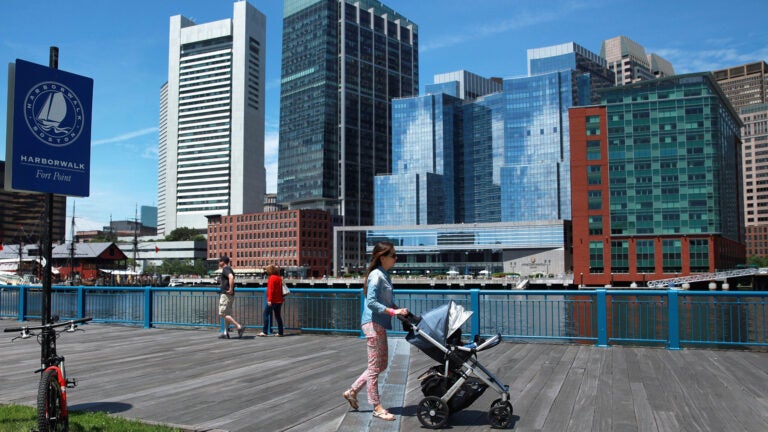