Family, friends, neighbors, and activists crowded Hopkinton Thursday afternoon to remember and to push for answers about the death of 16-year-old Mikayla Miller, but officials say completing their investigation could take months.

Speaking before the Hopkinton School Committee later Thursday, Middlesex County District Attorney Marian Ryan was asked by a committee member about the timeline for authorities to finish the probe, specifically whether, as the school official read, three months is a fair expectation.

“Three months is fairly quick actually, unfortunately,” Ryan said. “We have made some efforts to, obviously, given the public interest around this, to try to expedite the process. And of course you know, that’s always something that you do that at the expense of some other family has been waiting.”

Ryan said part of the work of investigators is compiling a report and letting the medical examiner make their findings. But investigations also include running forensic lab tests, which Ryan said officials “can’t really rush.”

“There’s a part that’s administrative and ministerial that you can maybe move a little bit up the list, and then there’s just that technical piece that just takes what it takes,” Ryan said.

Mikayla was found dead on the morning of April 18 in a wooded area off a walking path in the town. Ryan said earlier this week that authorities are still waiting for the medical examiner to determine the cause and manner of her death.

Mikayla’s mother, Calvina Strothers, has raised concerns over how the investigation has been handled.

Strothers told The Boston Globe that police initially told her Mikayla’s death was a suicide and that officers have been hostile toward her. She vowed Thursday “to have full transparency and to get justice for my daughter.”

Meanwhile, Ryan has denied allegations the case was “neglected” because Mikayla was Black and a member of the LGBTQIA community.

At Thursday’s vigil and rally, Strothers recalled the close relationship she had with her daughter, describing how Mikayla was “funny, loving, caring, and loved me to death.”

“You know the old saying, ‘Two peas in a pod.’ That was us,” she said. “We had a bond that was indescribable.” 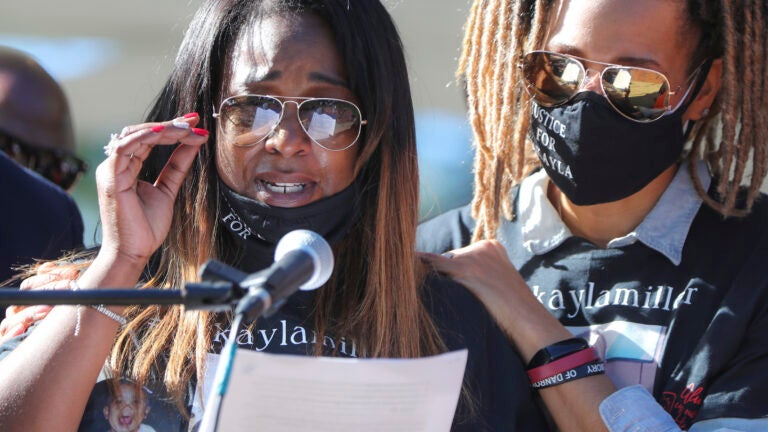 'A bond that was indescribable': During vigil that drew hundreds, Mikayla Miller's mother describes life with her daughter