Rob Gronkowski returned to Boston on Friday — and made a splash on the banks of the Charles River.

The former New England Patriots tight end is donating $1.2 million for the full renovation of the Charlesbank Playground on the Charles River Esplanade, in what officials described as “one of the largest private gifts ever to a state park in Massachusetts.”

The massive gift from the Tampa Bay Buccaneer and his Gronk Nation Youth Foundation was officially unveiled during an afternoon press conference at the playground, located near Teddy Ebersol Field and the Museum of Science, featuring Gov. Charlie Baker, Esplanade Association Executive Director Michael Nichols, several state officials, and — of course — Gronk himself.

“Rob Gronkowski is a lot of things,” Baker said, calling the 31-year-old a “terrific athlete” and “one of the most spectacular partiers of all time.”

“But the thing that gets lost sometimes amidst all the other things that everybody thinks and knows about is he’s a big man with a big heart,” the governor added, recalling the time Gronkowski spent in New England visiting children at hospitals and schools and his foundation’s work to support youth sports program.

Nichols, whose nonprofit maintains the Esplanade, said that Gronkowski reached out roughly 20 months ago through mutual friend Susan Hurley, a former Patriots cheerleader who helps runs his charitable foundation, who said the then-retired NFL player wanted make “a significant lasting gift to the people of Boston and really to the next generation of children of Boston.” Gronkowski walked through the playground before the event began.

In an email Friday morning, Nichols told Boston.com that the donation will fund the full-scale renovation of the playground, including removing the current climbing structures, swings, slides, and surfacing and installing “new, modern, and accessible equipment.” The money will also support the Esplanade Association’s costs of managing the project with DCR and create a 10-year maintenance fund for the playground.

According to Nichols, his group will begin the design phase next week. During the press conference Friday afternoon, he said the donation would help transform the playground into “a super fun place for children to learn, grow, exercise, and play” made more accessible by the completion of a nearby footbridge over Storrow Drive in 2018.

“Got a nice ring to it, doesn’t it, Rob?” Nichols said during the press conference.

“I thought he was gonna stop at Gronk Esplanade for a second,” Nichols joked. “We would’ve had a problem.”

Gronkowski noted Friday that he spent a week at Massachusetts General Hospital overlooking the park in 2013, after his broken forearm got infected and required surgery.

“I just don’t know how it got infected,” he said. “I was in Vegas body-slamming my brother at one point with a broken forearm when I was 22 years old. I don’t know what happened. But I was in the hospital for a week. And I was always looking down, right down to there, and seeing those baseball fields the whole time. So this is pretty special.”

Gronkowski said the playground was in the “perfect location, because it’s where the duck boats come in and out of the Charles River.”

“And you know I love duck boats,” Gronkowski, who won three Super Bowls with the Patriots, riffed off his prepared remarks.

“Maybe we might have a duck boat in the playground, too? I don’t see why not,” he continued. “Oh, there’s one right there! I know those duck boats. I almost fell out of there like 10 times. … That’s your [Baker’s] fault throwing those parades.”

After hanging up his Patriots cleats in 2019, Gronkowski came out of his brief retirement to join former teammate Tom Brady on the Tampa Bay Buccaneers. In their first season in Florida, the two former Patriots went on to win Super Bowl LV. Gronkowski also recently signed a 1-year, $10 million contract to play another season in Tampa.

“Thank you so much, Rob,” Baker said Friday. “We really appreciate it. And maybe we’ll see you again in February.” 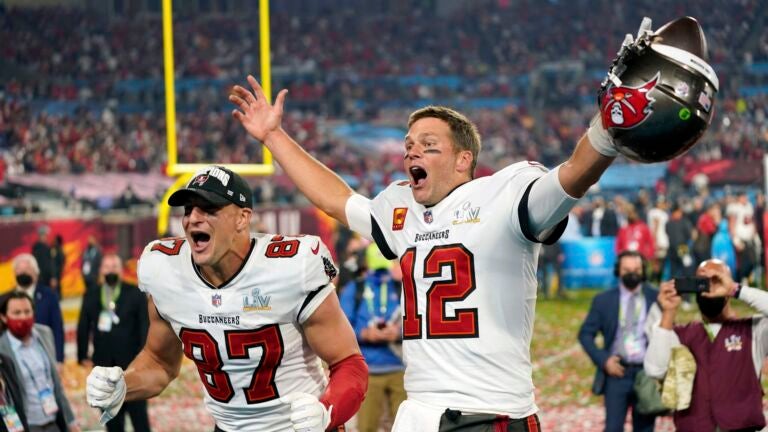