For Alesha Strycharz having her father walk her down the aisle on her wedding day was absolutely key, as it is for many brides.

But that special moment was almost taken away when her father had a heart attack just hours before her ceremony. Luckily, it was saved by the quick thinking of nurses and other staff at Beverly Hospital.

Strycharz’s wedding was set for Friday, May 7, at Briar Barn Inn in Rowley. Some of her family, including her father Ed, and guests stayed at the inn the night before. The morning of the ceremony, she said she saw her dad and he “looked great,” she told Boston.com in a recent interview.

But about an hour afterward, Strycharz said her sister called her and asked her to visit her father’s room, saying that he wasn’t feeling well. Hoping it was just some anxiety, Strycharz rushed to see him.

“He was holding his chest, sitting on the bed, clearly in a lot of pain,” she said.

When she asked him what was wrong, he told her he thought it was indigestion, and he reassured her he would be OK. He also told her his left arm hurt.

Strycharz called 911. Paramedics hooked him up to an EKG, and it began printing the results.

“They looked at my dad, and they said, ‘All right, Ed, you’re having a heart attack, you’re going to need to come with us,’” she recalled. “His face, it broke my heart. He clearly was so upset, and scared, of course, having a heart attack. I didn’t want to cry in front of him because I didn’t want him to feel even worse than he already did. So I held it together, but as soon as they took him away on the stretcher, I just lost it and started just bawling.”

Having her father walk her down the aisle was very important, said Strycharz, who lives in Melrose. Her mother passed away when she was young. Growing up, it was just her, her dad, and her sister. Her grandmother had helped to raise her while her father worked; she died in 2015.

“It was one of those things where I really wanted my dad to be part of that day,” she said. “It would’ve ruined my day if he had not been there.”

Strycharz met up with her fiance, now husband, Bruce Baisch, and they tried to figure out what to do. Their wedding planning team and vendors were all supportive, she said. Her dad soon called her from the hospital with an update — he would need open heart surgery and wouldn’t be able to leave the hospital even just for a little while to attend her wedding.

But he also floated the idea the hospital team had presented to him — a small ceremony at Beverly Hospital’s Ayer Healing Garden in addition to the one planned for guests in Rowley. Strycharz immediately agreed, she said. The officiant was able to meet them at the hospital, and she and Baisch made the drive from Rowley to Beverly.

“We got this together in two hours,” Liz Tassinari, associate chief nursing officer of cardiovascular services at Beverly Hospital, told Boston.com.

Strycharz brought her dad’s suit, plus his boutonniere, to the hospital. One of the staff helped him get dressed, tie and all. In the photos from the ceremony, the IV is visible still attached to Ed’s hand as he hugs his daughter, and hospital staff stand by to make sure he’s OK.

But he was able to walk her down the aisle as a small group waited with Baisch and the couple’s officiant. Tassinari noted that he was hooked back up to treatment as soon as the ceremony concluded.

“We were all crying,” she said. “It was really nice. It’s hard because it’s so crazy and it’s been so crazy in the hospital with the pandemic in the last year. It’s so nice to have a bright spot. I think the other thing is, I’m a nurse, and every nurse, you really get to be part of people’s lives. And so this was like, we got to be part of someone’s life in a really amazing time.”

Many of the nurses and doctors gathered around — some in windows overlooking the garden — and cheered for the couple after they were married.

“It was just so amazing,” Strycharz said.

Afterward, she and Baisch headed back to Briar Barn Inn. They held the ceremony for their guests, and had their reception.

Since then, Strycharz said her dad is doing well. He had his surgery and is now home recovering. He’s a big Bruins fan and was happy to get to go home and watch the game.

That day, it was important for her to find the positive in the situation, a lesson Strycharz said her dad taught her.

“That’s one of the biggest lessons he taught me while growing up,” she said. “I try to embody that in everything that I do. … I think it shows in the pictures and how he looks.” 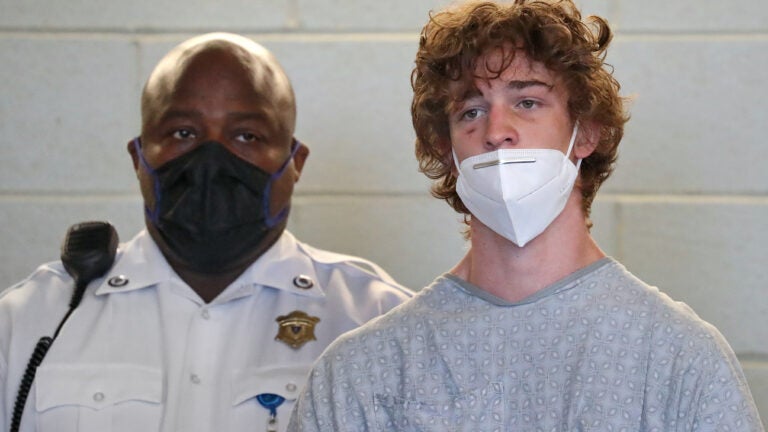