In Marshfield, a dozen homes were evacuated and hundreds were without power on Saturday as a gas leak fire burned for 10 hours.

The gas leak caught fire around 9:30 a.m. on Saturday morning, and burned until firefighters extinguished it around 7 p.m. that night. By the time the fire was put out, only 36 homes were without gas and a few were without power.

Video from the scene showed fire burning up to 40 feet high in front of a home on Plain Street. Marshfield Fire Chief Jeffrey Simpson told WCVB that no utility crews were working in the area where the fire started, but firefighters found a downed power line that may have ignited the gas leaking from a 6-inch underground main.

Simpson said he wanted to keep the fire burning because otherwise gas might pool and increase the risk of an explosion.

“First time in my career I want to see a fire burn, burn, burn,” Simpson told WCVB. “It’s the best thing for us right now is to keep it where it is and let it burn because if that fire goes out, you’ve got all that gas that’s going to run through these neighborhoods and cause us problems.”

In an email to the Boston Herald during the fire, Eversource spokesman William Hinkle said the priority remained keeping the area safe as they worked to isolate the leaking main, which would extinguish the fire. WCVB reported that Eversource crews were unable to find a valve to shut off the gas fueling the fire, and had to dig trenches on either side to seal off the main.

CBS Boston reported that no one was injured, and the fire did not spread to any nearby homes. 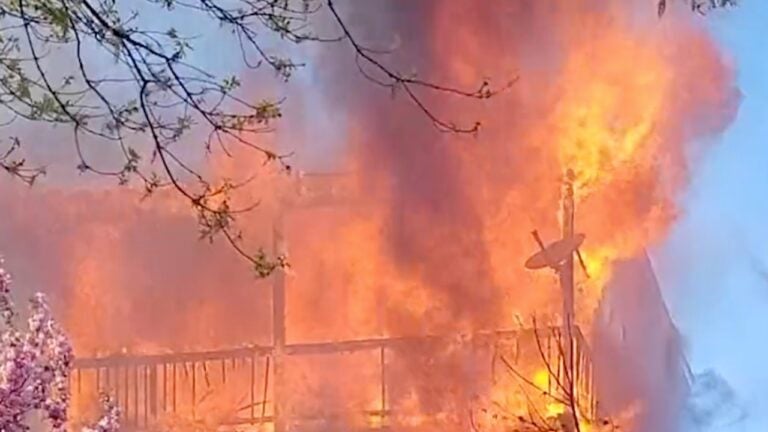