BOSTON (AP) — Gov. Charlie Baker is facing increasing criticism of his handling of the COVID-19 crisis at the Holyoke Soldiers’ Home, with calls mounting for a legislative response to the outbreak that killed 76 veteran residents last spring.

The tragedy led to the removal last year of Bennett Walsh, the former superintendent of the 240-bed, state-run facility, and the signing last month of a $400 million spending bill to finance construction of a new Holyoke Soldiers’ Home. Walsh faces five counts of causing serious bodily injury and five counts of criminal neglect. He has pleaded not guilty.

But critics say investigations of the outbreak, including one headed by a former federal prosecutor who was commissioned by Baker, have raised more questions than answers.

A report last month by The Boston Globe claimed the investigation by ex-prosecutor Mark Pearlstein didn’t fully explore the decision to hire Walsh or his qualifications for the job. The newspaper said Walsh was a politically connected hire with no background in health care administration.

Baker on Friday acknowledged he’d interviewed Walsh for a half-hour before he appointed him to lead the home in 2016, despite the governor claiming last year he had never met the former superintendent before swearing him in.

Baker said at a press conference that he forgot about the meeting with Walsh.

Democratic Senate President Karen Spilka said the state and the families of the veterans who died during the COVID-19 outbreak deserve more answers. She said with several investigations still ongoing, the Senate expected Baker and members of his administration “to be forthcoming on the legitimate questions that are being asked.”

“We expect to file, and hold a public hearing on, a reform bill with expediency. We look forward to hearing from, and working with, stakeholders to ensure these vital reforms become law,” Spilka said in a written statement last week.

State Sen. Diana DiZoglio on Tuesday also called for a Senate oversight hearing on the outbreak, with sworn testimony from the Baker and administration officials.

A separate legislative committee charged with looking into the tragedy found that “a crisis of leadership on many counts” contributed to the deaths.

“The causes were both immediate, including inexplicable decisions made by the Home’s leadership in the days and weeks preceding the outbreak, and long-standing, including systemic issues that left the Home mismanaged, understaffed, lacking sufficient oversight, and ill equipped to protect its residents from a deadly infectious disease,” the report released last month said.

Baker declined to specifically say if he’d testify before lawmakers about the deaths at the home, but said he was eager to work with them.

“The good news, to the extent there is some on this issue, is the legislative report, and the Pearlstein Report, and our legislation that we filed earlier in the year, are all basically chasing the same reforms,” he said during an unrelated Friday press conference. “They’re critical reforms, they’re important reforms, and I’m anxious to work with the Legislature to get them done.”

Sarah Finlaw, a spokesperson for Baker said Monday that “multiple independent investigations, including one by the Legislature and another by the Attorney General reached many of the same sad conclusions, specifically that Bennett Walsh and senior medical staff at the Home erred in their judgement resulting in the tragedy.”

Among the recommendations in a report by a special Legislative committee is making the veterans’ secretary post a Cabinet position that reports directly to the governor. The report also called for any new superintendent to be a licensed nursing home administrator. Walsh did not have those credentials.

Baker has also come under fire from a union representing government workers, the Boston Herald reported.

The National Association of Government Employees released a video on Facebook over the weekend faulting Baker for hiring someone to lead the home who had “no medical experience, had never run a nursing home, had anger management issues and was in way over his head.”

“Baker knew and he did nothing,” the group added. “Then COVID hit and 76 veterans died.”

A 77th resident at the home died from COVID-19 in December.

A lawyer for Walsh did not immediately respond to a request for comment by The Associated Press, but has said in the past that his client is innocent and only acted in what he believed was the best interest of the residents of the home. 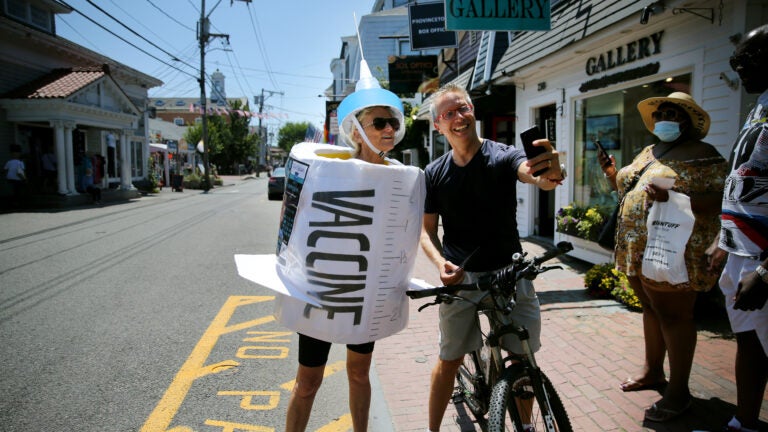