An avid surfer on Cape Cod, Jim Papadonis has seen a great white shark, and all of the surfers he goes out with have also.

There was the time he saw one fully breach the water about 150 yards from where he was surfing. There was also the time a friend and fellow surfer had a shark chomp into his board just after he had rode a wave in.

While there have been fatal shark attacks in New England, and various sightings over the last few years, Papadonis, along with other members of Cape Cod Ocean Community Inc., have worked on various initiatives to help keep people safe, including the use of shark repellent technology.

Papadonis, along with the rest of his surfing group, all use shark repellents from Ocean Guardian, particularly one that attaches to their surfboards, he said.

“Nobody really claims to be 100 percent effective but our view in this community is every little thing that we do is better than nothing,” Papadonis said.

The nonprofit is also looking at Ocean Guardian’s other technologies, which aren’t currently in use in this area, including one that attaches to a boat and creates a small shark-free swimming area around the vessel using the same electrical field technology the surfboard device does. There’s also a product that could create a larger swimming area with a buoy system.

While the biggest question on people’s minds is probably the effectiveness of the repellents, devices using an electric field have been praised by experts, according to the BBC.

“One key thing that I have learned is that there is no ‘silver bullet’ in terms of shark deterrents,” he said in an email to Boston.com. “Sharks are complex and species vary on physiological, biological, and morphological levels (among other things) which makes a uni-dimensional deterrent (e.g. electrical) not a universal shark deterrent.

“Where an electrical deterrent may be more effective on species that may rely more heavily on electroreception (e.g. bull shark), that same deterrent may not be as effective on a more visual predator (e.g. white shark),” said O’Connell, who earned his Ph.D. from the University of Massachusetts Dartmouth.

Many of the deterrents don’t have “extensive scientific research” behind them, O’Connell noted, and bank on the fact that shark attacks “are extraordinarily rare” – the probability of a negative encounter with a shark is about “1 in several million.”

That being said, while O’Connell said he hasn’t researched the Ocean Guardian device himself, he did say this one does have scientific research behind it and does show that it can deter sharks.

“With that, it is important to note that it is not 100% effective, so wear at your own discretion,” he said.

Along with technology, surfers are taking other practical measures to help sharks make the distinction between them and seals, according to Papadonis. Since black wet suits may make someone look like a seal to a shark, some are using white stripes to help distinguish themselves. Others are using black-and-white-striped leashes, which is the tether on the surfboard.

Take the poll! (Story continues below.)

Some are putting the stripes on the bottom of their boards to make them look different than the black shadow a seal might cast.

O’Connell also offered some advice for those looking to cautiously venture into the ocean this year. He advised against going swimming at dawn or dusk, and suggested you get out of the water if you see “an abundance of shark prey,” stay out of the water if people are fishing or chumming, and avoid murky water. He also advised to research shark deterrents before buying one.

Despite various ways of deterring sharks, fear of the animals has caused some to turn away from surfing on the Cape. Papadonis said his adult children won’t surf there anymore due to the attacks.

“That makes me both very happy and very sad because it really is such a fun thing to do in the family and together, and I miss them,” he said.

It was one of the reasons why he decided to join the organization, he said, noting that he’s focused on deterrents that won’t harm the animals.

Still, fellow surfers have seen them while surfing. Thinking back on the time he saw a shark breach the water, Papadonis described it as “the most spectacular wildlife event that I’ve ever witnessed.”

“All of a sudden this massive great white did a full rocket breach right out of the water,” he said. “It was incredible, it was scary.”

As for the friend whose board was bitten into by a shark, he said the board was donated to the Atlantic Great White Shark Conservancy.

“Everybody that I know has seen at least one great white shark, everybody that I surf with,” Papadonis said. “Many of those stand-up paddlers see them often.” 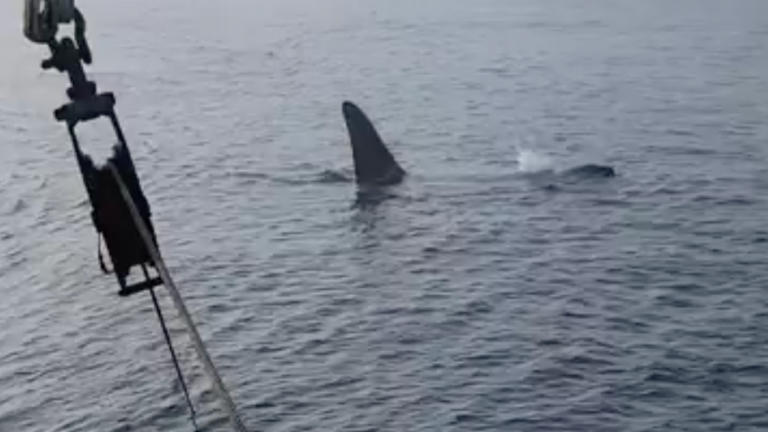 Solitary Orca spotted off the coast of Cape Cod