The sculpting began on June 17, and artists had three days to finish their pieces. Though this year’s theme was “Sand, Sun, & Fun,” the top prize went to a thought-provoking piece.

Abe Waterman of Prince Edward Island, Canada, took home first prize and $6,000 for his submission, called “empty.” His sculpture is double sided, showing a face with matching tears with the crouching figure of a man on one side and a woman on the other.

“I designed it a couple of years ago,” Waterman told SeaCoastOnline.com. “I have been kind of sitting on it as there weren’t many contests last year. I finally got a chance to do it. It’s a very personal piece… People can come down and take from it what they will.”

Reigning Hampton Beach competition champion Mélineige Beauregard of Montreal, Canada, took home second place, and a $4,000 prize, for her piece, “Rebirth of Phoenix.” She also nabbed the people’s choice award, which came with another $1,000.

Beauregard told SeaCoastOnline.com that she wanted to do something “birdy” that also related to a new project in her life. “It’s like a rebirth,” she said.

In third place was Karen Fralich, an 18-year veteran of the New Hampshire competition. She took home $3,000 for her piece, “Poker Face.” Like Waterman’s, her sculpture is two-sided and shows a man with his poker face and a losing hand of cards, with his less confident visage on the other side.

“He’s all tough and fierce on the front, but when you go to the other side, he’s… scared because he has an absolutely awful poker hand,” Fralich told SeaCoastOnline.com.

There’s still time to see these cool sculptures! The area will be illuminated through June 27. 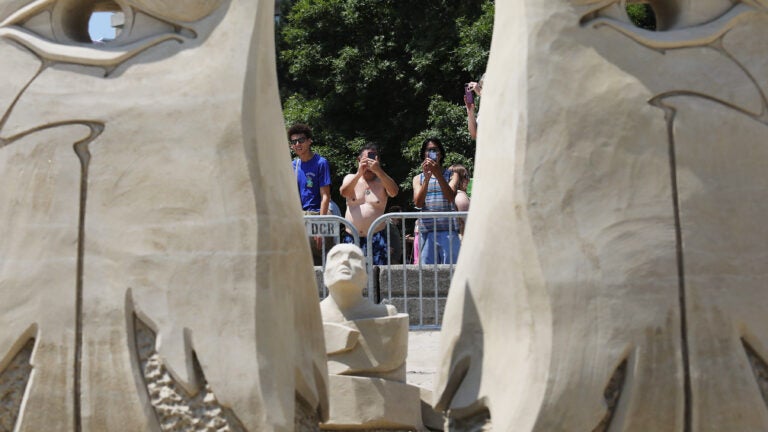