The years-long wait for the Green Line Extension just got a bit longer.

MBTA officials said Monday that full service on the 4.7-mile project extending the Green Line to Somerville and Medford won’t begin until next spring, five months after the extension’s previously scheduled opening, primarily due to delays caused by the COVID-19 pandemic.

Under the new timeline, the Green Line Extension’s one-stop branch to Union Square in Somerville — previously set to open in October — won’t open until sometime in December.

Meanwhile, the longer, five-stop branch through Somerville to Medford and Tufts University won’t open until May 2022, five months after its previous end-of-year completion date.

“There always has been schedule pressure,” John Dalton, the Green Line Extension project manager, said during a meeting Monday, adding that it was only “exacerbated” by COVID-19.

MBTA officials had maintained over the course of the last year that the entire $2.3 billion project remained on target for completion, after supply chain issues began to emerge last spring. Gov. Charlie Baker even teased agency officials in October that he would put the end-of-2021 completion date for the long-stalled project — initially planned in the 1990s as part of the Big Dig — “up on his wall.”

However, Dalton said Monday that the supply chain impacts they heard about last year “are now kind of revealing themselves, as far as what materials arriving on site and being installed and paid for.” State officials said last week that GLX crews are scheduling work at night to deal with the sporadic arrival on backlogged items like noise wall panels. Contractors have also faced staffing shortages in the midst of the pandemic, which Dalton said continues to be a concern

“COVID-19 remains a risk of the program,” he said. “Of course, all the headlines are encouraging, but at the project level, it is still a risk management matter we are working through.”

The revised timeline was approved by the MBTA’s Fiscal Management and Control Board as part of a settlement agreement with GLX Constructors — the group of companies contracted to build the project — to reduce the MBTA’s risk of facing lawsuits related to COVID-19 and “pin down schedule certainty.”

Under the agreement, the MBTA will pay up to $80 million from the project’s built-in contingency funding budget to insulate itself from potential legal liabilities, pay for the costs of additional work, and set contractor staffing requirements for the remainder of the project.

“We’ll be closing out all COVID impacts — both cost and schedule — through this settlement,” Dalton said.

Officials say the Green Line Extension is now about 80 percent finished, including 65 percent of all track work (and 100 percent of the Union Square branch’s track). All of the stations’ elevator towers have been built, and officials are just about wrapping up work on the overhead electric poles and a new vehicle maintenance facility included in the project.

Still, Dalton says they’re “not out of the woods yet.”

The final 20 percent of the project includes more additional construction work, incorporating new payment infrastructure into the existing system, and months of testing trains on the tracks — all of which could result in surprise costs.

“Twenty percent remaining is not something we’re in cruise control to tackle,” Dalton said.

While the delayed opening will come as a disappointment to residents in the area, the settlement did come with good news for Cambridge and Somerville.

The two cities had committed to contributing a combined $75 million in order to advance the project. But now, with the Green Line Extension more than $300 million under budget, MBTA officials say Cambridge and Somerville could be getting a full refund.

MBTA General Manager Steve Poftak said during the meeting that “future planned disbursements of funds from these communities to GLX will not be needed” and that the money the cities already contributed would likely be returned.

“Even with the settlement discussed today, I want to state my high degree of confidence, barring any major unforeseen events, that the funds already dispersed to GLX by Somerville and Cambridge will be returned to these communities following project closeout,” Poftak said.

Dalton noted Monday that the Green Line Extension remains in a “very solid financial position.” T officials said last month that the project had over $300 million to spend on unexpected contingency cost increases — including $103 million from the most recent federal COVID-19 relief package — more than enough to cover the $80 million maximum included the settlement.

Somerville Mayor Joe Curtatone, who spoke during the meeting Monday, acknowledged the disappointment of the delayed opening, but applauded MBTA officials for “sound management and fiscal administration.”

“I’d be the first to say I’d like to have it all today,” Curtatone said of the project, which is set to increase the number of Somerville residents who live within a half mile of a MBTA subway stop from 20 percent to 80 percent.

Curtatone stressed that the project — being built through densely populated cities amid a pandemic and adjacent to other construction projects like Cambridge Crossing and the new Somerville High School — is “not just laying down tracks.” And the settlement, he said, would be “monumental in greater predictability and clarity” and allow Somerville and Cambridge “to do more things for our community” with the returned funds.

“This is a complex project, but a great one,” Curtatone said. 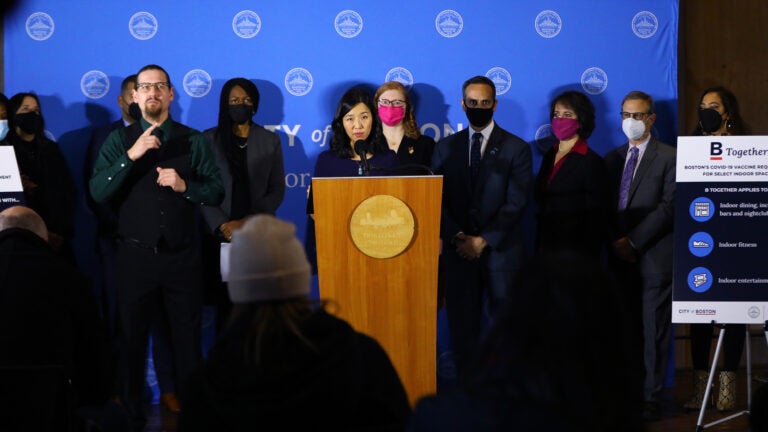 Not just Boston: Here are the other Mass. communities looking to require proof of vaccination for certain indoor venues