Last fall, California voters approved a ballot measure exempting workers for companies like Uber and Lyft from a state law requiring drivers to be classified as employees — and thus guaranteeing them minimum pay and benefits.

The vote — which came after Uber and Lyft teamed up with food delivery companies to pour a record-breaking amount of money into the ballot campaign and ensure that drivers would remain “independent contractors” — gave the ride-hailing companies a decisive victory in the fight over the future of so-called gig work.

Now, advocates think Massachusetts is about to become the next battleground.

“They’re going to try to do here what they did in California with Prop 22, which is buy themselves the law that they like,” attorney Shannon Liss-Riordan said during a press conference Tuesday organized by the labor-backed Coalition to Protect Workers’ Rights.

The group is anticipating a $100 million 2022 ballot campaign (primarily backed by Uber and Lyft) to change Massachusetts law to allow ride-hailing drivers — and potentially other workers — to be classified as “independent contractors.”

The companies have announced no such intentions, focusing their efforts — through the industry-backed Massachusetts Coalition for Independent Work — on a bill that would make the same classification change, as well as create portable benefits accounts for app-based drivers.

Still, with procedural deadlines approaching this summer, that focus could shift to the 2022 ballot.

What exactly is the fight about?

The ballot measure in California, known as Prop 22, came after state lawmakers passed a law in 2019 that codified a three-part test to determine whether a worker is an employee or an independent contractor.

Under the test, a person is a independent contractor if:

But if all those definitions are not met, employees were entitled to benefits like a minimum wage, workers’ compensation, unemployment insurance, paid sick leave, and paid family leave. And a California judge ruled last year that Uber and Lyft drivers did not pass that threshold — making them employees.

That was before Prop 22 passed — creating a carveout for ride-hailing drivers (the ballot measure also required the companies to provide a certain minimum wage based on how many hours drivers worked).

A similar fight has already been simmering in Massachusetts, where the three-part test for independent contractors has been state law for years.

“It was California that adopted our Massachusetts law, which then led to the backlash of the gig economy buying that law with Prop 22,” Liss-Riordan said. “And now it’s boomeranging back to Massachusetts

Uber and Lyft, however, have already been classifying their Massachusetts drivers as independent contractors. Last year, Attorney General Maura Healey sued the companies in an attempt to force them to classify their drivers as employees, so that they would be guaranteed benefits like a minimum wage and sick time. However, that lawsuit isn’t expected to be resolved anytime soon.

What are the stakes?

If forced to treat drivers as employees, Uber and Lyft executives argued it would “pose a risk to our business,” suggesting the change would result in higher fare prices and longer wait times. However, some researchers say the hikes would be limited to 5 to 10 percent.

Additionally, the companies — and, indeed, some drivers — say the freedom that contractor status gives them is preferable, even if it comes without protections or benefits.

“I don’t want to become an employee and give up my flexibility for some insurance,” Travis Jones, a Instacart shopper from East Longmeadow and member of the Coalition for Independent Work, told reporters Wednesday.

A poll last month — commissioned by Uber but conducted by the independent Benenson Strategy Group — found that 82 percent of drivers in California said they were happy Prop 22 passed. Others pointed to the intangible benefits of building their own schedule to fit around things like being home to help kids with homework or going to the gym.

“The flexibility that comes with being there for my daughter, especially during a pandemic, this really made sense,” Uber driver Marcus Cole said.

Opponents say the flexibility argument is a red herring.

“You do not have to be an independent contractor to have flexibility,” Liss-Riordan said. “Employers can give flexibility to their employees — nothing in our law prevents it. You can have flexibility and your basic rights to fair wages, minimum wage, expense reimbursement, overtime, paid sick leave and family medical leave, and workplace free of discrimination and sexual harassment.”

They also say the the push to classify traditional gig workers as independent contractors could spread to other service industries. Some grocery stores reclassified their workers after Prop 22 passed.

Veena Dubal, a University of California law professor and Prop 22 critic, said that venture capitalist have also signaled intentions to push into the hotel and retail sectors, where the workforce is disproportionately “subordinated racial minority and immigrant workers.”

“This is not about Uber and Lyft,” Dubal said. “This is about protecting the wages and the livelihoods of service workers across the country.”

For now, the Coalition for Independent Work has been pushing a Massachusetts bill that — similar to Prop 22 — would declare app-based drivers are independent contractors. The bill would also create portable benefits accounts for drivers and require companies to cover occupational accident insurance.

Opponents say those benefits don’t come close to stacking up to the protections drivers would receive if they’re defined as employees.

“We want the same benefits that every worker in the Commonwealth is entitled to,” said Beth Griffith, the executive director of the Boston Independent Drivers Guild.

Regardless, the bill hasn’t garnered much traction beyond its three initial co-sponsors and the Coalition to Protect Workers’ Rights says they’re confident their allies can convince the Democrat-controlled legislature against passing it.

“But these companies have another option, which is to drop nine figures on a ballot campaign,” Mike Firestone, the coalition’s director, said Tuesday.

The Coalition for Independent Work — which is backed by Uber, Lyft, Doordash, Instacart, Postmates, and several Massachusetts-based business groups — would have to file any ballot initiative before Aug. 4.

Conor Yunits, a spokesman for the group, told Boston.com that they’re “still very focused on the legislation.”

“Obviously, timeline sets up the way it sets up,” Yunits said.

Still, the Coalition to Protect Workers’ Rights says they’re working to preemptively organize by bringing together labor, civil rights, and even environmental groups to oppose a Prop 22 lookalike in Massachusetts.

Liss-Riordan says organizers in California “didn’t fully know what was coming and how much money really was going to be put into that battle,” which exceeded $200 million from Prop 22 supporters.

“So we’re getting out there early,” she said.

Still, despite initial funding from labor groups like the AFL-CIO, Firestone expects they will be outspent by a “scary” amount. His $100 million ballpark estimate of what companies like Uber and Lyft might spend would be more than double the record — set last year — for overall spending on a Massachusetts ballot question).

“In a slightly more democratic system, the initiative petition process was not really created so that a company could just spend massive amounts of money to pass a law that favors the company,” Firestone said. “And I think that should trouble everybody who’s following this.” 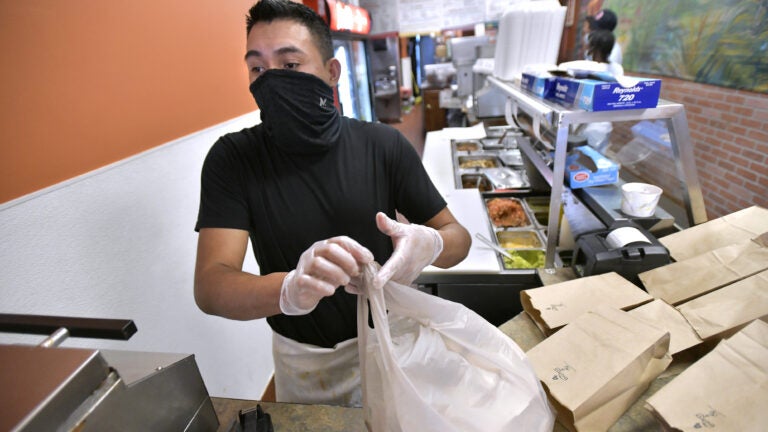 Report: Food deliveries in Mass. skyrocket, and negative impacts could be coming