Wakefield police used a sonic blast to help apprehend nine out of the 11 Rise of the Moors members whose standoff with authorities left Interstate 95 closed for hours on July 3, the department’s chief said Tuesday.

The tactic was one of a few Chief Steven Skory outlined in an update to the Wakefield Town Council, providing town leaders with new details of the interaction.

According to Skory, Massachusetts State Police first contacted Wakefield police for assistance around 1:20 a.m. that morning, and the department sent three officers to the scene.

“The trooper rolled up on two cars that were in the breakdown lane,” Skory said. “He thought that maybe they were broken down and they needed assistance. He was immediately met by 11 individuals who were dressed in camouflage gear, bulletproof vests, tactical gear, and were armed with long guns and handguns that were fully exposed.

“At some point he asked for driver’s licenses and licenses to carry (for) firearms, and that’s when these individuals took up the sovereign attitude that they did not have to adhere by our laws,” Skory added.

Members of the Rise of the Moors believe they belong to their own sovereign nation, which means they are not subject to U.S. laws. They were reportedly traveling to Maine to conduct training.

State police spent nearly an hour and 40 minutes negotiating with the group before informing the men they would likely be arrested, Skory said. At that point, officers heard guns being loaded, and eight of the suspects jumped over the highway guardrail and into a wooded area, he said.

Authorities at the scene called in a SWAT team, and eventually two men who entered and exited the woods were arrested, according to Skory, who said about another 150 officers from throughout Middlesex County also responded to help form a two-mile permieter.

Around 10:30 a.m., police decided to attempt to apprehend individuals who exited the wooded area and were returning to their vehicles, Skory said.

With the assistance of the Wakefield Department of Public Works, officials blocked the highway with four plow-wielding dump trucks, he said.

Authorities also deployed an LRAD, which Skory described as a “very high pitch audible alarm, which basically disables somebody temporarily.”

“So they deployed that and were able to successfully take the remaining nine people into custody — no injuries to any officers, no injuries to the suspects,” he said. “So a successful outcome there.”

Those who were arrested and identified are:

A 17-year-old juvenile and two men who refused to give their names were also arrested.

Hernandez, Johnson, Dow, and the unidentified juvenile are also charged with furnishing a false name to police, according to officials.

Cumberlander is charged for allegedly providing false information to purchase a firearm, officials said. Jamhal Abdullah Bey is wanted to violating the terms of his bail stemming from an ongoing case, in which he is charged with obstructing a law enforcement officer, disorderly conduct, and resisting arrest, prosecutors said. 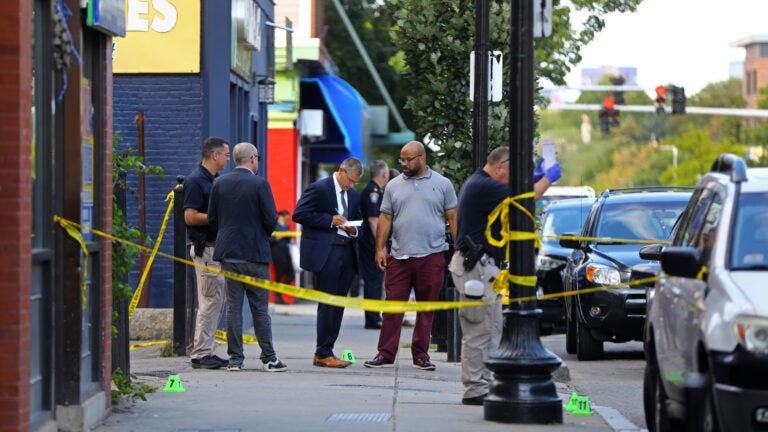