For over 100 years, one sentence – buried in years of historical records -– identified the location of a hidden time capsule: a copper box was left by the First Lutheran Church of Boston on October 16, 1898, in the original church’s foundation.

“Just tucked there, bottom of the page, in the middle of the paragraph, [it said] ‘also there was a copper box put inside of the cornerstone and these are its contents,’” said the congregation’s pastor, James Hopkins.

The capsule’s location was sitting in church records for over a century, but it wasn’t until this past December – decades after the Lutheran church moved – that the capsule’s existence was even discovered.

“That document also didn’t have any coordinating instructions like hope you’ll open this later or something,” Hopkins said. “It’s gone completely overlooked.”

But reading the sentence isn’t when Hopkins first heard of the copper box: the time capsule was first found seven months earlier. Coincidentally, Hopkins first discovered the record hours before the ceremonial box opening while researching the church’s history.

“The morning of the event, I came in super early to just read so that I could talk somewhat authoritatively about the congregation’s history in Boston,” said Hopkins, who became the church’s pastor two years ago.

The First Lutheran Church of Boston moved from their South End location at 38 West Newton Street in 1959, unaware they left the cornerstone capsule behind. In the 1980s, Inquilinos Boricuas en Acción (IBA), a non-profit community group, purchased the church to use as an arts center.

The church’s structure was deemed unsafe recently, so IBA decided to demolish the building and rebuild. Construction workers on the project first found the box in the cornerstone on December 23.

“I received a phone call from the construction company that was doing the demolition of the building,”  said Mayra Negrón-Roche, Chief Operating Officer of IBA. “And he said ‘we found a box.’”

The 12 by 12 by 6 box inside was made of copper and sealed tight. After spending 123 years in the ground, the copper had oxidized into a slightly green hue.

Negrón-Roche said her team decided to call the church. The two groups coordinated a time to hold a joint time capsule opening event.

“We decided that it would be great to do this together since it’s sort of a connecting point in our mutual paths,” Hopkins said.

On July 7, the event was held at the First Lutheran Church’s new location at 299 Berkeley Street. After opening remarks from each groups’ leaders, the unboxing began.

The box was mostly filled with papers – a hymnal, a history of the church, a church constitution, a catechism, some newspapers, and a copy of the Augsburg Confession, an important text to the Lutheran faith. Various coins of the time were also left in the box.

“It was very emotional to see the history because they put this box in the building thinking that at some point in 120-something years after someone is going to find it,” Negrón-Roche said.

Unfortunately, many of the papers had deteriorated and were illegible. Hopkins said the most legible items were the binding on the hymnal and the newspapers, which he said was printed on the day the cornerstone was set.

“[The newspaper] was talking about some heroic work done due to an accident at sea, like right off Quincy,” Hopkins said “We saw the headline for that and there was some international politics on the cover.”

The First Lutheran Church of Boston now has possession of the items, which they said they hope to put on display in their new building.

“It’s a wonderful reminder… that we partake in a history, and that there will be people who will follow after us,” Hopkins said.

Negrón-Roche said the team joked about possibly creating their own time-capsule in IBA’s new building on West Newton Street.

“We just moved from the South End to the Back Bay in the late 50s and that’s already been laid,” Hopkins said. “Now I need to go through our records again and see if we left something in the cornerstone.” 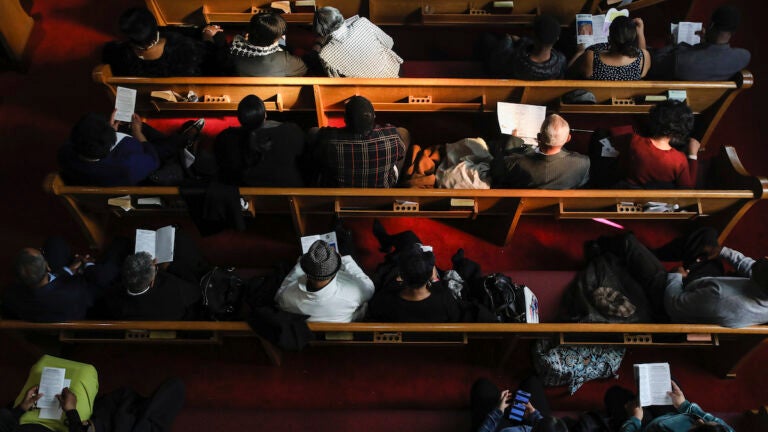 A historic, South End church is leaving its home of over 130 years