BOSTON (AP) — One of four operators on board two Green Line trains that collided on Friday and injured more than 20 people has been placed on paid administrative leave.

A spokesperson for the Massachusetts Bay Transportation Authority, Joe Pesaturo, declined to identify the operator, but said the decision was made Saturday based on developments in the ongoing investigation, according to the Boston Globe.

The operator was piloting the first car of the two-car trolley that struck another Green Line train from behind. The operator has worked for the transit agency for seven years.

The four MBTA operators were among the injured.

Shuttle buses had replaced trains between the Kenmore and Washington Street stops for much of Friday evening following the collision. Train service began running again early Saturday after the trains involved in the crash were removed overnight.

The Boston Fire Department said in a tweet Friday that about two dozen people were taken to hospitals with injuries, none of which were life threatening.

The National Transportation Safety Board announced Saturday morning that it is investigating the crash.

The Suffolk District attorney’s office is also looking into the collision on the B branch of the Green Line, according to the Globe.

The trains crashed on the Green Line track running along Commonwealth Avenue west of Boston University.

MBTA General Manager Steve Poftak said at a press conference Friday that the transit agency is also looking into the collision.

“We will obviously get to the bottom of this. This should not happen and we will find out why it happened and will ensure that it won’t happen again,” he said. 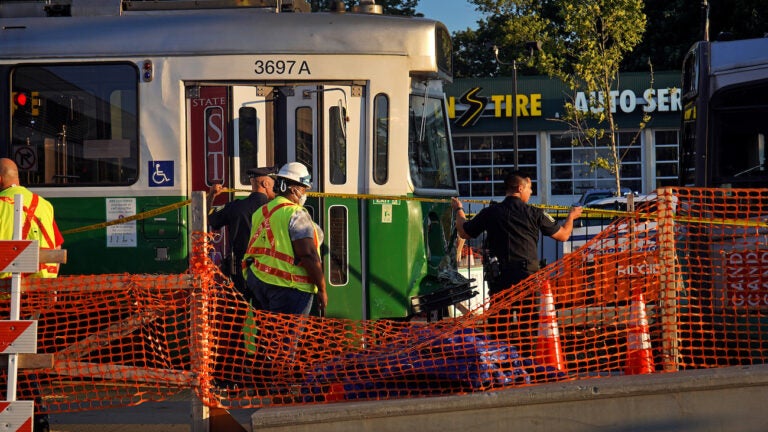