Danny Sheehan, the 8-year-old from Marshfield whose love for Aquaman went viral last year, died Sunday after a years-long battle with brain cancer.

“Just after midnight, while in our arms, Danny took his last sweet small warm breaths and took flight,” his mother, Natalie Sheehan, wrote. “An Angel in Heaven. Instead of here on earth. Surreal and utter heartbreak can’t even begin to describe this feeling inside. But, I have to believe that what I whispered to him was true. Because moms don’t lie. When you wake up in Heaven, baby, you will be safe and happy and cozy. You won’t be afraid. You will be with your brother. Watching over me and daddy and everyone.”

Danny was diagnosed with pineoblastoma, aggressive brain cancer, in January 2017.

“Oh my gosh, my favorite one!” he exclaimed, followed by a happy “AQUAMAAAAAAAAAAN!!!”

The Marshfield resident’s love for the superhero caught the attention of “Aquaman” actor Jason Momoa, who called Danny in November.

On Monday, Momoa posted on Instagram about his young fan’s passing, writing that he is dedicating the “Aquaman 2” film to the 8-year-old.

“I just found out this heartbreaking news,” he wrote. “All my Aloha to this beautiful Ohana Love u baby boy rest in (peace) You will live in my heart I dedicate aquaman 2 to you lil angel Aloha UNKO Aquaman.”

Visiting hours will be held for Danny in Marshfield on Wednesday, with a funeral mass and burial to follow on Thursday, according to his obituary. His family is asking that in lieu of flowers, donations be made to Cops for Kids with Cancer in “Police Officer Daniel Sheehan’s name.” 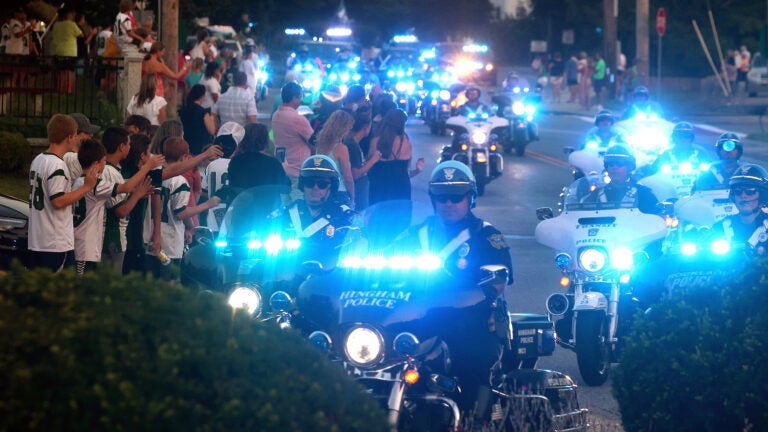 Photos and video: ‘AquaDan’ honored with procession ‘befitting a superhero’ in Marshfield