The female fledgling was found in distress on the ground in Middlesex County in late July and brought to the Tufts Wildlife Clinic in Grafton where it died, the state Division of Fisheries and Wildlife said in a statement Wednesday.

Toxicology tests on a liver sample from the raptor confirmed the cause of death was lethal levels of what the agency described as “second-generation anticoagulant rodenticide.”

The poison kills by preventing blood from clotting normally, resulting in fatal internal bleeding. Wildlife can be poisoned either by eating poisoned bait directly, or by eating prey that has consumed the bait.

An adult bird died of the same cause in March. There are more than 80 nesting bald eagle pairs in Massachusetts.

Given an eagle’s hunting range, it’s impossible to determine the exact source of the latest rodenticide poisoning, the agency said.

More than eagles are at risk, the state’s ornithologist said.

“Not only raptors, but many other kinds of wildlife have been the victims of unintentional rodenticide poisoning,” Andrew Vitz said. “Secondary exposure to rodenticides has been documented in other animals such as foxes, bobcats, and coyotes.”

He warned that unsupervised dogs and cats are also vulnerable to unintended exposure.

Animal rights activists after the death of the bald eagle in March urged state lawmakers to regulate the poisons even more strictly.

A bill introduced by state Rep. James Hawkins, D-Attleboro, has been referred to the Legislature’s Joint Committee on Environment, Natural Resources and Agriculture. 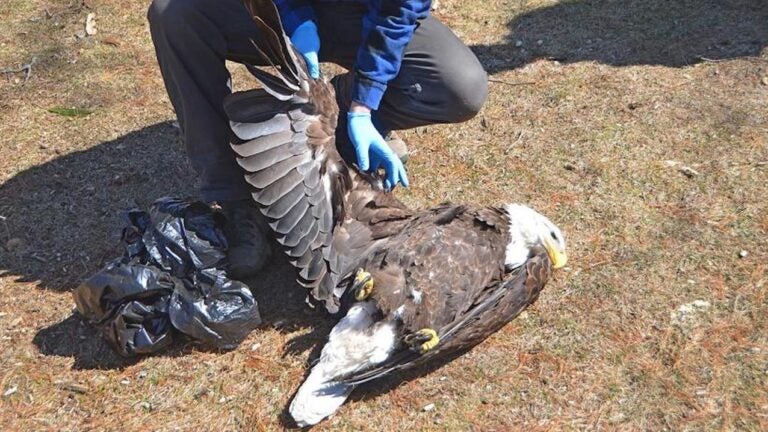