BOSTON (AP) — The U.S. Centers for Disease Control and Prevention said Sunday that all the counties in the states of Connecticut and Massachusetts are the sites of high or substantial transmission of COVID-19.

The rise of transmission in the two states mirrors a nationwide and regional trend.

Some health authorities are recommending that vaccinated people go back to wearing masks indoors in areas of high or substantial transmission. That includes almost all of New England.

The CDC reported that every county in the six-state region was the site of high or substantial transmission on Sunday except Orange County, Vermont, and Kennebec County, Maine.

New England continues to pace the nation in COVID-19 vaccine use, and Massachusetts is close to Vermont for the highest rate in the region.

About 74% of Massachusetts has had a first dose of vaccine. Only Vermont is higher at 75%. All six states are above 65%. The nationwide number is a little less than 60%.

The New England states and Hawaii continue to have some of the highest vaccination rates in the country.

A look at pandemic developments around New England:

Maine’s largest city is going to require all municipal employees to get vaccinated or undergo weekly COVID-19 testing.

The plan goes into effect on Sept. 10 for all of Portland’s non-union workers, WCSH-TV reported. A date for union employees is subject to bargaining, the station reported.

The number of daily deaths has stayed steady. The seven-day rolling average of daily deaths in Maine stayed the same over the past two weeks, remaining at 0.43 deaths per day.

The AP is using data collected by Johns Hopkins University Center for Systems Science and Engineering to measure outbreak caseloads and deaths across the United States.

Almost 50,000 Vermonters who get their health insurance through Vermont Health Connect could get help with their premiums through the federal coronavirus relief package.

About $25 million from the American Rescue Plan will be used to help bring down the premiums.

WCAX-TV reports that in the past, Vermonters earning over $50,000 weren’t eligible for help and the state’s cheapest plan would have cost $491 a month. Now, that level of coverage would cost $211.

For some low-income Vermonters, the subsidies will make the insurance free.

“That’s a significant amount. Over the course of these next five months, they will be saving a couple thousand dollars for the average person who was paying full price,” said Sean Sheehan of the Department of Vermont Health Access.

About 25,000 people who buy insurance through the state’s online marketplace for insurance are eligible.

The plan also makes tens of millions of dollars available to some 20,000 Vermonters who are uninsured if they sign up for Vermont Health Connect. So far, around 2,000 Vermonters have done that.

The enhanced benefits only last until the end of next year, but the congressional delegation is pushing to extend them further.

New Hampshire is expanding the pool of people authorized to administer COVID-19 vaccinations.

Gov. Chris Sununu recently signed legislation to allow advanced pharmacy technicians to administer the shots in addition to the pharmacists who have been handling the vaccines so far.

The new law, which takes effect Nov. 8, also provides for recording vaccinations in the state vaccine registry with consent. Supporters said that would help primary care providers, who currently don’t have a reliable way of knowing if patients have already received vaccines from pharmacies.

Daily COVID-19 cases of the coronavirus are up in all six New England states, but only Rhode Island and Maine are seeing a flat number of daily deaths.

The seven-day rolling average of daily deaths in Rhode Island stayed the same over the past two weeks at 0.14 deaths per day. 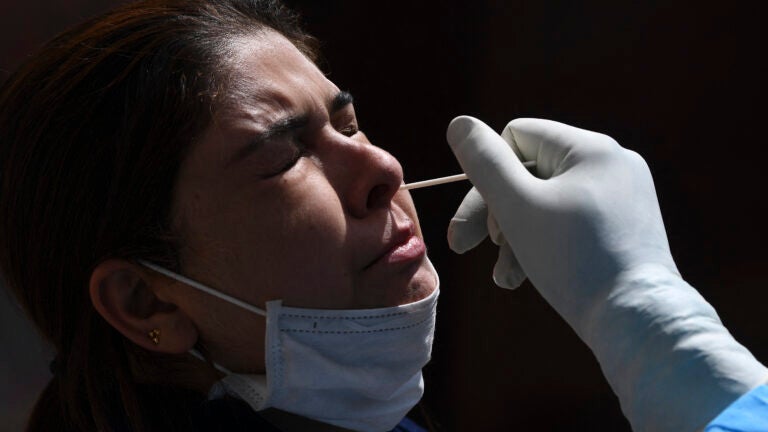