A wild scene involving a moose hitting the back of a passing car unfolded in Worcester Wednesday morning. Thankfully, the moose was later captured safely and is being released into the woods.

According to CBS Boston, the moose was spotted near Cambridge Street around 3 a.m. Later that morning, around 8:30 a.m. it was seen galloping down Hollywood Street. When it crossed onto May Street, it hit the back of a passing car.

“He cracked the windows of the car, and dented the door and made the car, you know, the car almost went off the road,” Dan Antonucci, a sanitation worker, told WCVB.

Antonucci said he was working a regular trash route when he and his partner spotted the moose, which they started following after the collision to warn people to get out of its way.

“I was trying to get away, because he looked angry, because he was getting aggravated because we were chasing him up and down the street,” Douglas Flores, who was working a road construction job, told WCVB.

According to NBC Boston, the moose charged at least one person on a porch before being tranquilized by Massachusetts Environmental Police behind a home on King Street. Officials said the moose was estimated to weigh 1,000 pounds. Spectrum News reported that it took a dozen Worcester police officers, city workers, and environmental police officers to get the moose into a Department of Public Works front-loader to transport it back to the woods. The moose suffered a minor laceration on its nose, but was otherwise unharmed.

“The moose has been relocated to an undisclosed location for its own protection,” Environmental Police told CBS Boston.

MassWildlife told Spectrum News it’s rare for moose to wander so far into the city, but common for them to live in the wooded areas and wetlands to the west of Worcester.  Environmental police told WCVB that a few years ago they removed three moose from Worcester in a one-month period.

Dave Wattles, a MassWildlife biologist, told Spectrum News the moose is around 4- to 5-years-old.

“Right now is the mating season for moose. So they are moving widely, particularly the males like this one, they’re trying to find mates,” he said. “And so right on the West side of Worcester, you’ve got large tracts of forest in the Worcester watershed lands, really continuous blocks of moose habitat for miles and miles. So it’s not surprising to have moose there at all.” 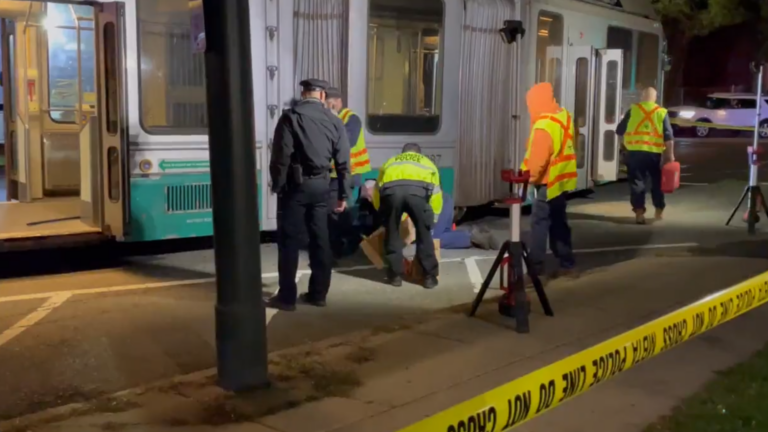