​​Over 150 passengers were deplaned on the tarmac after a plane arriving at Logan Airport experienced a rough landing Sunday morning.

Allegiant Airlines flight 2601 flew into Boston from Knoxville, Tenn., WHDH reported, and blew a tire upon landing. The plane was disabled on the field, so 154 passengers and 6 crew members disembarked via air stairs, helped by Massport Fire and Rescue officials, and bussed to the terminal.

Airport officials told WHDH there were no injuries reported, and the incident had minimal impact on airport operations.

Video taken by a passenger, and shared with WCVB, shows flight attendants telling passengers to put their heads down. John Coutinho told WCVB the pilot deftly maneuvered the plane and landed it smoothly.

“It was hard. It was very frightening because we didn’t know if that landing gear was going to hold, if that tire was going to blow out, if we were going to spin out and they were going to have to foam up the runway and we’d have to get off on the chutes,” he said.

Passengers were told to deplane quickly, and many left phones and wallets behind, as well as luggage.

“They wouldn’t let us take anything off, so my wallet’s on there (and) my debit card. I couldn’t go out for lunch or anything,” passenger Justin Hebert told WCVB. “I would’ve loved to be at a bar right now watching the Patriots win, but unfortunately I can’t do that.”

An Allegiant spokesperson told WCVB passengers who left their contact information with the airline would have their luggage sent to them via courier, but those who decided to wait for luggage at Logan had to wait hours.

The airline told NBC Boston it refunded ticket prices and gave each passenger a $100 voucher to use on future travel. 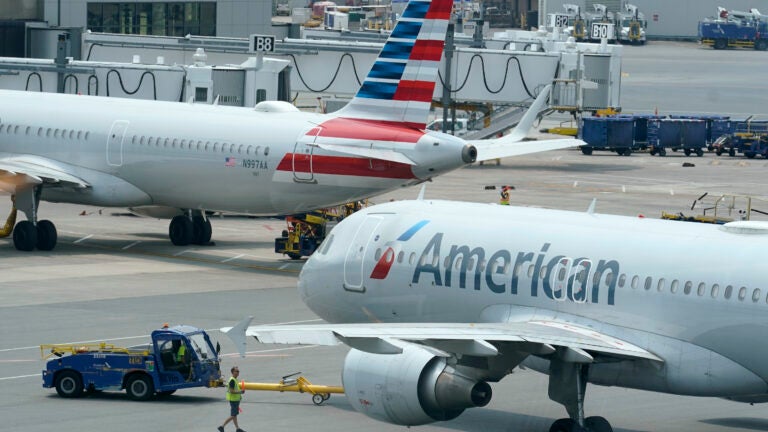