Local shelters are brimming with animals ready to be adopted — especially if you think small.

“All of our shelters are definitely full of guinea pigs, bunnies, birds, and hamsters,” said Cailey Bloomgarden-Bredin, associate director of Animal Care Operations for the Animal Rescue League.

Across their three shelters in Boston, Dedham, and Brewster, there are 65 small
animals to be exact.

At the MSPCA-Angell, the story is the same.

As of Friday, the organization had a total of 48 mice,  44 rabbits, 32 guinea pigs, 22 rats, and 10 hamsters across their adoption centers. Also some degus, birds, chinchillas, ferrets and gerbils. There was even a hedgehog, a bearded dragon, and a sugar glider, according to Rob Halpin, the chief communications officer for MSPCA-Angell.

Mike Keiley, director of the MSPCA-Angell adoption centers, said the staff is trying some different strategies to keep the animals comfortable and safe, such as repurposing space. You may find the rabbits in a corner of the cat room for example.

“We are using every nook and cranny of our offices,” he said.

So what’s bringing in so many smaller animals?

While it’s hard to know for sure, it’s possible the spike is an unanticipated side effect of the pandemic.

Last spring, shelters were flooded with clients eager to adopt a dog or a cat. Families were home and able to spend the time training their new pet, and animals bring comfort and ease feelings of isolation and anxiety.

The interest was so high, there simply weren’t enough dogs and cats to adopt. So people desperate for a pet may have opted for a guinea pig, bird, hamster, or rabbit instead, and they are now changing their minds.

“That’s a theory I’ve heard,” said Bloomgarden-Bredin of the ARL. “I think it’s still too early to figure it out.”

Alexis Trzcinski, the director of Animal Control and Care in Boston, which oversees the animal shelter in Roslindale, suspects that the return to normalcy does play a role. Kids are back in school full-time, adults are back to work, and the responsibility of caring for the pet — even a smaller animal — may have been greater than was expected, she said.

Guinea pigs are coming into the shelter more, she said, but so are parakeets. In an effort to find new homes, MSPCA-Angell is hosting an Adopt-a-thon for its smaller animals this weekend at all its locations including the Northeast Animal Shelter in Salem, which it runs. All adoption fees for the littlest animals will be waived. Registration is required.

One thing that’s Keiley said the MSPCA-Angell is definitely not seeing is the rumored return of “pandemic pets” or cats and dogs adopted during quarantine. While some expected or feared it would occur, he added, data doesn’t support that claim.

“I don’t think there’s any trend of that, nationally, locally, or within our organization,” he said.

Since more pets were adopted during the pandemic, it has put a strain on veterinarians, who are juggling existing patients with a slew of new clients. To help new pet owners who can’t get an appointment at a vet clinic, the city is offering a low-cost vaccination and dog licensing clinic on Sept. 25.

Meanwhile, if you’re looking for a dog or a cat, this may be a good time to visit the shelters again. The organizations have resumed trips to relocate animals to Massachusetts from other states where there is a vast amount of homeless animals, and they are also able to take in more strays and surrendered pets.

“If you’re still interested, we now have more choices,” said Keiley of the MSPCA-
Angell.

At the Animal Rescue League, the amount of available pets is also balancing out with the number of inquiries.

“At the beginning of the pandemic, we definitely saw an increase in adoptions,” Bloomgarden-Bredin said. “Right now, we’re back to what they were pre-pandemic for this time of year.” 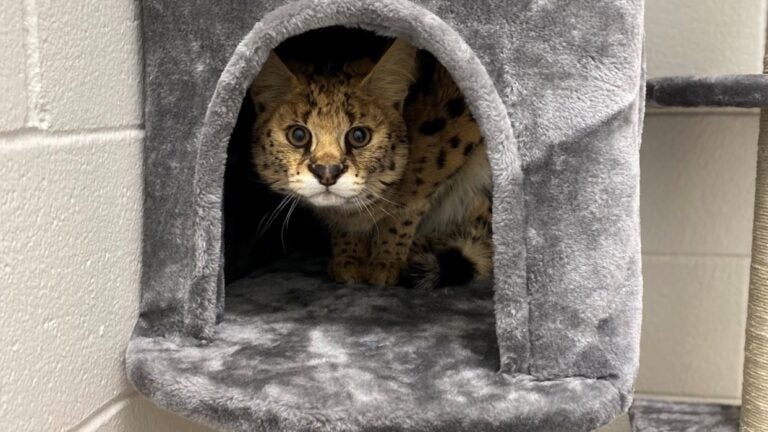 Bruno, the rare African serval found in Lincoln, is on the move