BOSTON (AP) — A Native American tribe is calling on Boston University to change the name of a dorm that honors Myles Standish, the military leader of the Pilgrims.

The Massachusett Tribe at Ponkapoag says Myles Standish Hall should be renamed Wituwamat Memorial Hall after a leading Native American figure massacred with other tribal members by Plymouth Colony settlers in 1623.

“Long celebrated by many as a New England folk hero, Myles Standish is remembered by this lands’ first peoples for the extreme acts of violence he committed against their ancestors,” says a recently launched online petition seeking the name change.

According to the tribe’s history, Standish and his men killed Wituwamat and other members of the Neponset Band of the Massachusett Tribe because Standish suspected Wituwamat of plotting against the fledgling English colony. Wituwamat was beheaded and his head displayed atop Plymouth Colony’s meetinghouse as a warning.

The online petition also argues that Standish has no connection to the university or the stately Back Bay neighborhood where the dorm is located. Instead, the dorm takes its name from the building’s origin as the Myles Standish Hotel.

Built in 1925, the elegant brick hotel was located steps from the Charles River and Fenway Park, home of the Boston Red Sox. It was purchased by the university in 1949 and converted into dorms.

Travis Franks, a postdoctoral associate at the university, argues in a Tuesday op-ed for WBUR that changing the dorm’s name is the next logical step for BU, which has committed to making its campus a “diverse, equitable, and inclusive community.”

He says the university has made other laudable efforts, such as recognizing Indigenous Peoples’ Day as a university holiday, but notes that Native students, staff, and faculty remain “drastically underrepresented” on campus.

“It is imperative, then, that the university partner with the Massachusett Tribe at Ponkapoag and honor their wishes by making Wituwamat Memorial Hall a reality,” Franks writes. “As the first building many visitors to campus encounter, WMH would be a powerful symbol of the university’s commitment to continuously evolve to reflect its core values.” 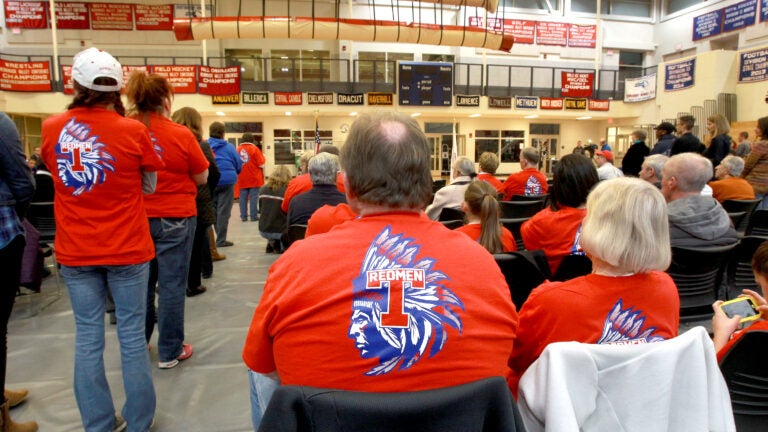