WASHINGTON (AP) — The pilot of a plane that crashed on Cape Cod this month may have been trying to abort the landing in heavy rain before the plane crashed into trees beyond the runway and burst into flames, according to federal investigators.

Another pilot for the same airline, Cape Air, told investigators the plane was traveling “a little faster than it should be” when it touched down, and he knew it would not be able to stop on the wet runway, the National Transportation Safety Board said Wednesday in a preliminary report.

The second pilot saw the plane try to take off again, but it wasn’t climbing fast enough. After clearing a fence, “The airplane disappeared into the trees, and he then saw a ball of flames,” the report recounted.

The pilot and six passengers on the Cape Air Cessna 402 from Boston were seriously injured but survived the Sept. 9 crash near Provincetown, Massachusetts.

The pilot was not identified. The preliminary report indicates he is very experienced, with 17,617 flight hours, including 10,000 hours in Cessna 403 planes.

Investigators did not give an opinion about the cause of the accident. It usually takes the NTSB a year to 18 months to write a final report and reach a decision about cause.

The pilot who witnessed the crash was in another plane holding on the ground as Cape Air flight 2072 approached Provincetown Municipal Airport. He said the pilot of flight 2072 radioed to ask if the airport lights were on, and he replied that they were — and that visibility was improving as the rain eased.

The NTSB said airport surveillance video appeared to show that it was raining heavily at the time, and a splash of water could be seen as the plane landed. There was also a tailwind, which would make stopping more difficult.

The plane settled upright about 200 feet (60 meters) from where it first struck the trees, the NTSB said. The fire destroyed parts of both wings but all major components of the plane were recovered. 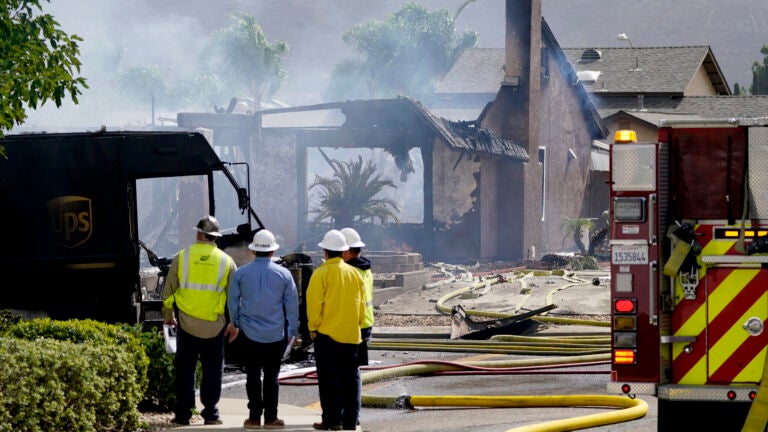 At least 2 dead in California plane crash that burned homes