Before local singer Radha arrived at her usual Sunday Faneuil Hall set, she knew something would be different about the day.

“I did remember having this thought that each Faneuil Hall experience brings something so colorful and spontaneous,” Radha, a 22-year-old musician from Allston, said. “Like I’m excited to see the characters I meet today, and I’d like to see how this goes and how it pans out.”

Not long after she arrived, Radha — who uses only her first name as her stage name — was singing John Legend’s popular song “All of Me,” a song which she called “a fan favorite” at Faneuil Hall. As people passed by — some stopping to listen, others dancing, and occasionally a few singing along — she noticed one man in particular standing away from the crowd and watching her perform with his family.

“I see someone that looks like John Legend, in a trench coat and a mask on, with some kids by him,” she said. “I was like, ‘Wow, that’s pretty funny; he looks just like John Legend.'”

It was when the man took off his mask while watching the performance, that Radha made the realization: The man was the original artist of the song she was singing.

“It was quite a coincidence,” she said. “People wondered if it was like staged or something, and it was like, there was no strategy at all.”

Legend was walking around Faneuil Hall with his wife, Chrissy Teigen, and their two kids on Sunday before his concert at the Orpheum Theatre that night. But Radha had no clue he was in town.

“There’s a part of the experience where I asked him — while I’m singing — ‘Why are you in Boston?'” she said. “It was just one of the first thoughts that came to mind. Like why?”

Radha said she felt shocked. But despite the pressure, she said she tried to live in the moment and take in the whole experience.

“Obviously I was shocked internally, but I wanted to continue singing and definitely share that moment with him and his family and just thank him through the music for being such an inspiration to me,” she said. “The artist in me is programmed to just continue no matter what happens.”

Some people at Faneuil Hall captured the interaction in a video, which quickly went viral on Instagram and Twitter.

A recent graduate of Boston University, Radha studied finance and works on the business side of a music technology company. But on weekends and nights, she said she performs gigs around Boston at hotels, luxury properties, and for the past two months, Faneuil Hall.

“Live performances in particular have been the most gratifying and rewarding to me day-to-day,” she said. “So every evening I take the opportunity to do gigs and get exposure and share art and interactions with people.”

Radha, who is Indian American, said she primarily performs R&B and likes to incorporate some “Indian flare” into her work. She also sings classical Indian music, too.

She comes from a musical family: Radha said her mom is a singer, and her family always encouraged her to “be creative.”

Before Sunday, Radha’s voice has gotten the attention of other celebrities, such as Willow Smith and Jason Derulo. But these interactions have all been online; this was her first live celebrity interaction.

“It was definitely a one of a kind experience,” she said. “Especially at Faneuil Hall, I haven’t run past any artists with as much recognition as John Legend so that was definitely unique.”

At the end of Radha’s rendition of “All of Me,” Legend came over, tipped her, and briefly chatted.

“He was really sweet — tipped me, which I didn’t expect — and then gave me a hug,” she said. “Our conversation, it was short and sweet. He basically said, ‘You have a very nice voice and thank you for singing my song. It means a lot.'”

Radha said she also told Legend he is a huge inspiration for her and thanked him for listening.

“I just appreciate him listening to local talent,” she said. “That was definitely a wonderful and gratifying feeling.” 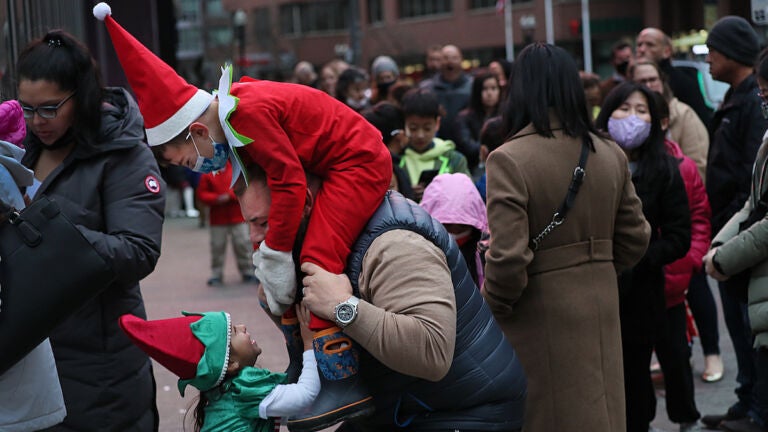