A new forest is growing in Cambridge.

Planted in the city’s Danehy Park in September, the dense grouping of new trees and plants follows a unique method of forest design that proponents say boosts biodiversity and climate resilience. It is the first such woodland — called a Miyawaki forest — planted in the northeastern United States.

The 4,000-square-foot microforest, shaped in a circle, in the North Cambridge park evolved from a collaboration between Biodiversity for a Livable Climate and the SUGi Project, in partnership with the city.

Maya Dutta, who worked as the project manager on the forest for Biodiversity for a Livable Climate, told Boston.com the idea for the microforest emerged at the start of 2021 after the Cambridge-based group learned about the Miyawaki method and its benefits.

“It immediately sparked our interest because we’re very interested in ecosystem restoration,” she said.

To pursue the idea, the Cambridge group got in touch with SUGi Project, which works to fund and implement Miyawaki forests and other biodiverse ecosystems, and connected with one of their forest makers, Ethan Bryson.

“It was with his help that we could figure out what the technical specs were and what we needed to do to find a site in the city, to prepare it, to get the species, to put it all together,” Dutta said. “So that was very pivotal.”

After gathering input from other local activist and community-based organizations, she and her colleagues worked closely with Cambridge’s Urban Forestry Division to determine possible sites for the forest in the city, source plants, and gather the required equipment for the planting.

“The City of Cambridge has a very ambitious Urban Forestry Master Plan and really does prioritize trying to do plantings like this and consider climate resiliency,” Dutta said. “So it was really great to work with them and spread awareness of this particular method and hopefully pave the way for how plantings get done in the future.”

At its core, a Miyawaki forest is a very densely planted, biodiverse pocket forest, according to the project manager.

The aim of the process is to recreate a whole ecosystem and the natural processes that exist in forests native to the region.

The Danehy Miyawaki forest has about 50 different species, Dutta said. That’s far more than are used in traditional tree plantings, where you might see one or two different species in an area.

“The idea is, much like in a natural forest, to have that natural diversity, so that each plant, with its own kind of niche and its own particular products and participation in the ecosystem, trade nutrients and have this collaborative relationship,” Dutta said. “There’s a big emphasis on that symbiotic relationship between the plants themselves and then also with the life in the soil — the microbial and the fungal life there.”

Danehy Park is built on the site of a former landfill, so there is hope that the Miyawaki forest will help remediate the soil and contamination from the dumping ground over time, she said.

In addition to soil remediation, using Miyawaki forests as a tool for reforestation is gaining traction because the method has proven effective at providing all the benefits trees supply in general for fighting climate change — through drawing carbon out of the air into the ground, releasing oxygen, and providing a cooling effect to the area immediately around them.

“One thing that trees do, and Miyawaki forests do especially well because of the density of trees and other plants, is to cool the surrounding area because they’re participating in the water cycle,” Dutta said. “Essentially their natural processes, like taking in water and transpiring them in a vapor … cools off surrounding areas.”

The forest also provides important food and habitat for pollinators, supporting other creatures — like insects and birds — that are crucial to the health of the ecosystem.

In addition, the density of the plantings will help take in water and infiltrate the ground to aid in buffering flooding and erosion, which will become more and more important as more intense storms occur as a result of climate change.

Miyawaki forests tend to grow really quickly and become completely self-sustaining after the first two or three years of initial maintenance, according to Dutta.

“Because of the dense placing and very biodiverse array of species used, Miyawaki forests are observed to have extremely high growth rates and extremely high survival rates,” she said. “So a standalone street tree which has to be watered and maintained over a long period of time may not do so well, especially in changing climate conditions. But in Miyawaki forests, the survival rate of trees has been observed to be about 95 percent.”

For the project, Biodiversity for a Livable Climate worked to provide outreach and education about the forest with local groups in Cambridge and spread the word that volunteers were needed to help with the planting on Sept. 25.

More than 100 people ended up turning out to help plant the forest over eight hours.

Before the process began, the forest was blessed by Marylee Smunitee Jones, a member of the Yakima nation, along with representatives from local Native American communities.

It was a moment of being part of the ecosystem and surrounding nature, instead of separate from it, Dutta said.

“It was a really special experience to be planting this with people, young and old, in the community,” she said. “We had kids, we had grandparents, we had families. And they were from all over. People are really excited to participate in something that they can see grow and also to feel like they’re doing something in their community to help prepare for the future and to have a hand in climate resiliency in their community. I think that’s one really important aspect.”

She hopes that soon many other Miyawaki forests, which can be planted as small as 1,000 square feet, will join the company of the Danehy woodland — both locally and around the world.

“It was a really tremendous experience,” she said. 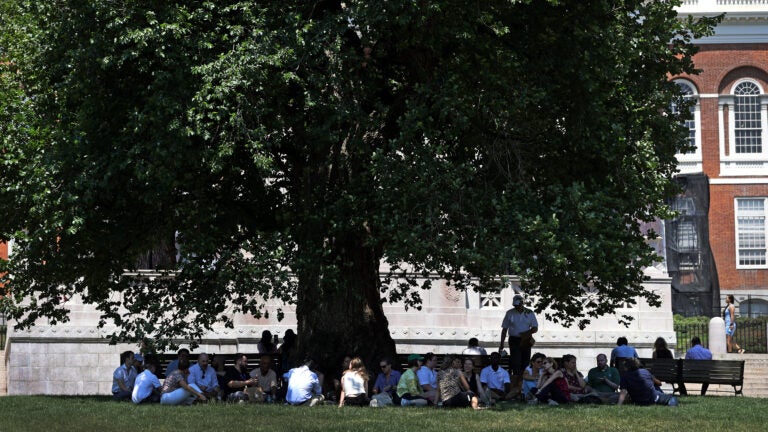