Six times more natural gas is leaking into the skies of Boston than is officially reported, new research shows. The study, published in the Proceedings of the National Academy of Sciences, also suggests that gas could be escaping not only from distribution pipelines but from inside businesses and homes as well – a finding that some say may be overstated.

Natural gas is made up primarily of methane, which – when released directly into the atmosphere instead of being burned first – has more than 80 times the warming potential of carbon dioxide over a 20-year period.

The study monitored natural gas methane emissions in the Boston area between 2012 and 2020. It found that an average of 49,000 tons of methane leaked into the air each year. That amounts to an estimated 2.5% of all gas delivered to the metro area and is equivalent to the carbon dioxide emissions of roughly a quarter-million cars operating for a year.

The scientists say their estimated leak rate is six times higher than estimates based on the Massachusetts Department of Environmental Protection greenhouse gas inventory. They also found that despite efforts to plug methane leaks in Massachusetts during the study period, there was no significant decline in emissions.

“What’s being done to address methane emissions isn’t working. We need to look at some new approaches,” said Maryann Racine Sargent, an environmental scientist at Harvard University and a co-author of the paper. “This is a huge amount of emissions and it’s ones that the state isn’t taking into account.”

Further, urban leak rates do not include emissions from the production of natural gas before it reaches a city. Previous research has shown that those emissions have also been underreported – a 2018 study in the journal Science, for instance, found that supply chain emissions were about 60% higher than estimates based on the Environmental Protection Agency inventory.

This latest paper calculated that, in the Boston area, upstream and urban emissions combine for a total loss rate of 4.7%. At those levels, Sargent said, the greenhouse impact of natural gas can “become equivalent to coal.”

Greenhouse gas inventories often rely on bottom-up accounting in which emissions are estimated using mathematical formulas and averages, such as leaks per mile, multiplied across a gas network. This study, on the other hand, measured what’s actually in the air. “What we’re doing is a top-down measurement,” said Sargent. “You can’t miss anything. It’s all going to show up in the atmosphere.”

According to Robert Howarth, a professor at Cornell University who has studied methane leaks, this paper “is the most thorough and carefully conducted yet to examine methane emissions from the use of fossil gas in the urban northeastern U.S.” The authors say it also lines up with what they saw in previous work on methane emissions in urban areas.

“They’re all giving the same answer,” Sargent said. “There’s something big that these bottom-up studies are missing.”

The research published Monday is among the longest time periods that anyone has examined urban emissions, said Eric Kort, a climate scientist at the University of Michigan, whose work has captured the problem over shorter periods. “They did a really rigorous analysis,” said Kort. “It’s interesting to see that the emissions haven’t changed very much.”

These persistent emissions come despite Massachusetts passing multiple laws aimed at curbing leaking methane emissions in recent years. “We’re on a treadmill,” said Nathan Phillips, a researcher at Boston University who has studied methane emissions in the area. As some leaks are fixed, new ones arise and existing ones grow larger. “That is just not good enough,” he said.

This longer time series data also allowed researchers to observe methane levels across seasons, which proved significant. They found that emissions were greater in the winter, when demand for natural gas in Boston was also highest.

“We see this really strong correlation between the emissions from natural gas and the natural gas that’s consumed,” said Sargent. But, the paper says, because the pressure in the distribution pipelines stays “fairly constant year-round,” that wouldn’t explain the seasonal difference. The urban pipelines appear to be responsible for only about half of the observed emissions, Sargent says.

Phillips, however, isn’t convinced about the pressures in the system remaining constant, calling the assumption “simplistic.” Mark Kleinginna, the founder of the consulting company Integral Energy, agrees, saying “there is a lot more variability that could cause the leaks to be greater in the winter time.”

Sargent acknowledges that “this is an area where more data reporting from the gas companies would be very useful.”

Eversource, one of the gas companies serving Boston, wrote in an email that “most of the year pressures do not fluctuate more than about 20% on many of our different systems, but during winter, with very cold weather and high gas consumption, the pressure ranges can be considerably more than 20%.”

In any case, this latest study points to other possible contributors of escaping methane, including end-use consumption from appliances and space heating. “This very large change with season is strong evidence for a source post-meter,” she said, adding that more research is needed in this area and that emissions from buildings is “the next thing that our group is really focused on.”

Audrey Schulman lives in Cambridge, Mass., and a few years ago her house was the site of an indoor natural gas leak so large it prompted the emergency replacement of her boiler. Even her new high-efficiency furnace, she learned, belches a little bit of methane every time it starts up.

While methane leaking inside a home may sound alarming – and it’s certainly not ideal – both Schulman and Kort note that the gas only ignites at relatively high concentrations, far past the point at which it would be noticeable. “It should be readily detectable by people’s noses,” said Kort. The emissions, though, “still matter a lot for the climate.”

The leak at Schulman’s house was nonetheless large enough to require remedy. It was also particularly ironic, as she is the founder of an environmental nonprofit called the Home Energy Efficiency Team. The organization has evolved from focusing on weatherizing buildings in the Boston area to helping fix methane leaks and advocating for a move away from natural gas.

Given the hundreds of natural gas leaks Schulman has seen fixed in recent years, she would have liked to see some signal of emissions decline in this most recent study – and that may still come. But, she says, the paper ultimately adds to the evidence that natural gas shouldn’t be seen as a clean fuel.

“We cannot continue to use it,” said Schulman. “We must transition off.” 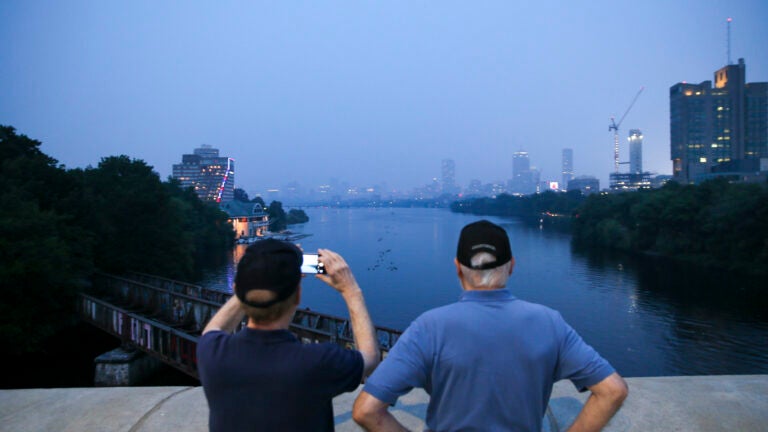 When it comes to climate goals, could this little-know Mass. official hold the state's feet to the fire?