State officials are pushing forward on a plan to establish low-threshold transitional housing on the campus of the Lemuel Shattuck Hospital in Jamaica Plain for individuals struggling with homelessness in the area of Massachusetts Avenue and Melnea Cass Boulevard.

Marylou Sudders, the state’s secretary of health and human services, announced the move in a letter on Monday, citing the urgent need for both temporary and permanent low-barrier housing in responding to the humanitarian crisis at Mass. and Cass.

Sudders said the state will partner with Pallet, a company that builds rapid-response “shelter villages,” to create a “temporary cottage community” for up to 30 individuals from Mass. and Cass, which has become the epicenter of the region’s intersecting crises of addiction, mental health, and homelessness.

“The path to stability out of homelessness begins with a safe place to sleep and a supportive environment,” Sudders said in a statement.

According to the state, the “temporary cottage community” will be made up of 18 private and lockable sleeping cabins, which will feature one or two beds, personal climate control, and storage.

The state said it will also be partnering with a local human service provider with experience serving unhoused individuals to provide wraparound support services to the individuals on site.

Meals, laundry, case management, and mental health and addictions services will be provided “with the goal of supporting residents in their transition from the streets to permanent housing and longer-term stability,” Sudders said.

“The provider will also be responsible for general oversight of the community, including 24/7 security, as the safety of the residents as well as hospital staff, patients and the surrounding neighborhoods is paramount,” she said.

Sudders said the state is working to ensure that the temporary cottage community does not interfere with the Shattuck’s current operations or the longer-term development plans already laid out for the Franklin Park campus.

The cabins are expected to be up and running in December, according to the state.

The move by the Executive Office of Health and Human Services is one of several efforts underway to address the public health crisis at Mass. and Cass.

At the start of the month, city officials began implementing encampment protocols established through an executive order from then-Acting Mayor Kim Janey targeting the removal of the hundreds of tents in the area with the goal of getting people struggling with homelessness, addiction, and mental health connected with resources and services.

Under the executive order, the city said unhoused individuals in the area must be given at least 48 hours notice that tents must be removed and no one will be required to remove their structure unless they have been offered a bed in a shelter or another service like a treatment facility. But under the executive order, officials said people who were offered placement and refuse to remove their shelter could be charged with disorderly conduct.

In a parallel effort, a special court session is operating at the Suffolk County jail to process individuals arrested on open warrants in the area.

Doctors and advocates have condemned the city’s measures as criminalizing a vulnerable population and stressed that the actions will only cause harm and disperse the struggling individuals from the services and community they are connected with. The ACLU has filed a lawsuit to halt the protocols.

Instead of the encampment protocols, a recently established coalition of public health experts and advocates has called on Mayor Michelle Wu, as well as state leaders, to “meet basic needs, provide housing, and promote public health for the people living unsheltered in the area of ‘Mass. and Cass.’”

Among the first steps the group is calling for is a focus on establishing non-congregate shelters and low-threshold housing.

Cassie Hurd, executive director of the Material Aid and Advocacy Program, a nonprofit that provides support to individuals experiencing homelessness, and a member of the coalition, is among those sounding the alarm over the city’s efforts at Mass. and Cass.

She said the shelters built by Pallet have grown in popularity, particularly on the West Coast, since the onset of COVID-19, as officials have worked to create alternatives to congregate shelters.

But she expressed concern that the use of the cottages at the Shattuck is being done “in partnership with the city destroying existing encampments.”

“What we know is that people have created a space and community that is safest for them in the absence of actual housing,” Hurd said. “And these Pallet shelters, to be clear, are not meaningful long-term housing for people …  The money could be better used to house people in transitional hotels, actual housing. We have no lack of supply in Boston. It is just that it is unaffordable.”

Hurd said she wants to see Wu focus on creating “actual housing,” expanding harm reduction services, and meeting the health, safety, and sanitary needs of people living in the encampments.

“Our hope is that Mayor Wu will change course and rescind the executive order that criminalizes people for creating solutions in the absence of fully resourced solutions — that they should be able to remain in community with encampments being serviced to meet their basic needs,” she said.

Wu said last month that she supported Janey’s plan for addressing encampments at Mass. and Cass, but she has since said there are improvements that can be made to the approaches to the crisis.

Looking at the state’s plan for the Shattuck, Hurd said she is concerned that the cottage community is being built in an area where individuals will be unable to access the services they already rely on.

Jim Stewart, a steering committee member for SIFMA NOW, a group that advocates for supervised consumption sites in the state, and director of the First Church Shelter in Cambridge, expressed similar concerns. He said he’s worried about how the relocation will impact individuals who have already developed service connections and meaningful contacts.

“If it’s really just to get people out of the Newmarket area and get the problem off the back of the incoming administration, then I don’t think it’s going to end well,” he said. “Especially for the people who are going to be stuck out there.”

While acknowledging that the state’s effort would mean the 30 individuals wouldn’t be living in tents during the winter, Stewart pointed out that instead they’ll be in sheds.

And they will still likely have to exit the structures to use a communal bathroom facility, following the models of other Pallet communities, he said.

Stewart said he’s concerned that in trying to decentralize the issues around Mass. and Cass, officials are essentially isolating and exiling individuals to surrounding areas “where they’re not going to be noticed.”

“I have great concerns about removing people from proximity to services and the community that has been helping them,” he said. “I think everyone has to give [the state] the chance to roll out the plan in more detail … But absent details, it seems like another example of just trying to get it out of sight and put it somewhere else so people will stop complaining about it.” 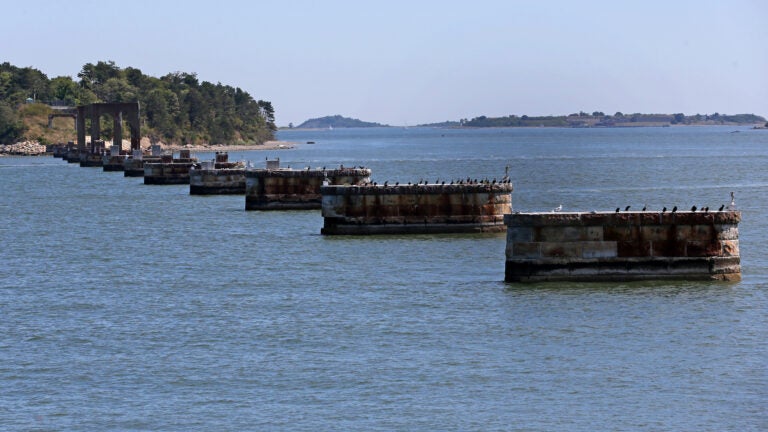