When newly elected Mayor Michelle Wu arrived at Boston City Hall for her first full day on the job Wednesday, she didn’t step out of the side door of a car. Rather, she emerged from a packed train at State Street.

The reason, she said, was simple

“If I have to get from Roslindale to City Hall during rush hour, the T is the fastest way to get here,” Wu told reporters minutes later outside City Hall.

However, it wasn’t solely a choice of convenience. While the new mayor has access to a free parking spot like many other state and local elected officials, the outspoken public transit advocate said she plans to “continue taking the T wherever and whenever possible” to keep tabs on service.

“It is a chance also to understand how the T itself is working,” Wu said.

Before her swearing-in ceremony Tuesday afternoon, Wu and her family traveled to City Hall via the Green Line — her sons’ favorite line, no less.

On Wednesday, it was the Orange Line — from Forest Hills to State Street in downtown Boston (indeed, while the MBTA trip is estimated to be roughly 20 minutes, a car trip along the same route during the morning commute can vary between 20 to 55 minutes, according to Google Maps).

“Today the train came quite quickly — was not delayed at all at any of the stops — but it was quite full already,” she said. “And we are back approaching ridership that I remember pre-pandemic in the morning commute. Sometimes you couldn’t even get on the train at certain points. And so we are seeing that there’s a huge, huge demand as our businesses are opening back up.”

While MBTA ridership on the Orange Line remains about half of its pre-pandemic levels, MBTA officials have also said that returning riders may be surprised by the reemergent crowds in the wake of the COVID-19 pandemic. Other modes, like buses and the Blue Line, have rebounded even quicker.

Wu has publicly chronicled her ventures taking the MBTA as a city councilor and working mother. From her personal @wutrain Twitter account, she also hasn’t held back criticism in the effort to press for improvements.

On Wednesday, Wu noted that taking the T was also a way to stay in touch with the city’s populace, recalling a conversation with a cafe baker and a Mattapan mother concerned about school choices.

“It’s important to also get a sense of how our city is doing,” Wu said. 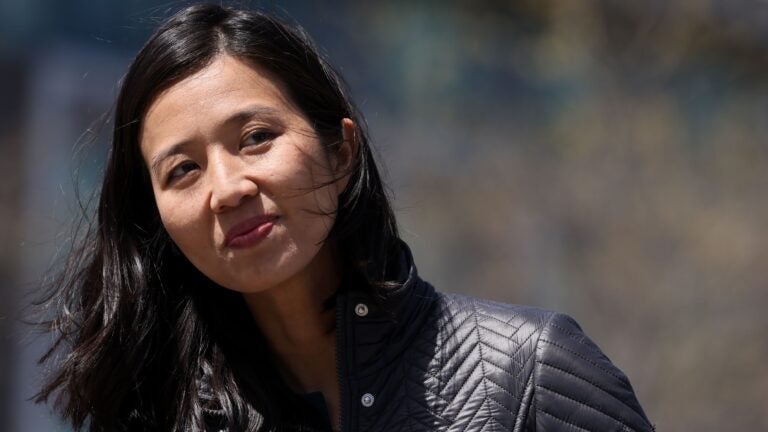 Mayor Wu: No plans right now to bring back mask mandate amid increase in COVID-19 cases