Get ready: many of us will see the first snowfall of the season this weekend.

A cold front pushing offshore from Southern New England is the leading edge of much colder air to be with us over the weekend. There’s enough moisture behind this frontal system along with a small area of low pressure to bring us an area of rain and snow late this evening into the early morning hours of Saturday. Some areas will see the ground turn white and even see some measurable snow away from the coastline. The chances we see snow are 50/50 and I think it’s possible some of you don’t see anything at all. The map below gives an idea of what is possible.

Many of you will see your first flakes of snow if you’re up tonight, and upon waking tomorrow. Some areas could see anywhere from a coating to an inch or two on the grassy surfaces. The most likely places to see accumulation are the higher elevations of Worcester county. In Northern New England snowfall will accumulate in the mountains allowing the plows to be out for the first time.

Everything is moving along quickly, so the blend of clouds and sun to start Saturday will brighten to full sunshine by the end of the day. Temperatures will start in the upper 20s and lower 30s and only rise 7 to 10 degrees, remaining below 40 all afternoon. This time of the year the sun angle is so low that snowfall can linger in shaded areas even with temperatures above freezing.

It will be very cold Saturday night, and will feel like winter. I expect plenty of sunshine again on Sunday with some increase in afternoon clouds. It will be a little less cold and winds will also not be as noticeable, with afternoon temperatures reaching towards 40 degrees.

Another weak weather system brings some rain and snow showers for Sunday night and early Monday followed by a continuation of below average temperatures for much of next week.

This Sunday-Monday weather system to conclude the weekend could also bring a coating to perhaps half an inch or an inch of snow in some areas, especially inland away from the water. It is equally probable there is no accumulation. This does not look to be anything significant, nor should it impact the morning commute on Monday.

Temperatures during the middle of the upcoming week will be between 40 and 45 degrees in the afternoons, falling to the 20s at night. This still gives us an opportunity to continue to get yards cleaned up and prepare for the colder, snowier weather that eventually will blanket the area. 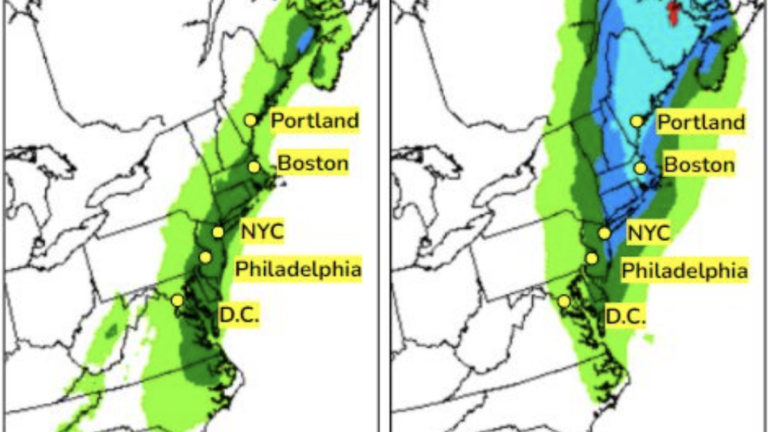