Authorities received 13 calls for service in a five-month span in 2019 to the Manchester, New Hampshire home where Harmony Montgomery was last seen that year when she was 5 years old.

Boston 25 News reports that Manchester police files show officers responded to the residence at 77 Gilford St. over a dozen times between June and November 2019, with the majority of calls made for domestic violence, animal, and building complaints.

A neighbor contacted authorities on Aug. 5 of that year with concerns “about a young child living at that address,” records obtained by the news station show.

The house was up for auction at the time and the caller claimed there was “no electricity, just a small generator and there is trash everywhere.”

The New Hampshire Division for Children, Youth, and Families was contacted to check the conditions and officials determined, “Everyone’s home, generator is running, food in the house, they are healthy. All is well,” according to the police report.

The home has been a focus of investigators as the search for Harmony continues. Police finished a search of the residence on Monday after probing it for three days.

Harmony’s disappearance has made for a peculiar missing persons case as the girl, who has blonde hair and blue eyes, was not reported missing by her mother until November 2021 — approximately two years after she was last seen.

The ensuing investigation has led to the arrest of the girl’s father and his wife.

Last week, Adam Montgomery was arrested on allegations he assaulted Harmony. His wife, Kayla Montgomery, was charged when prosecutors alleged she took in over $1,500 in welfare benefits dedicated to the girl, even though the child was no longer living with her.

In court documents filed on Monday evening, prosecutors indicated that based on a review of her file with the Department of Health and Humans Services they no longer plan to prosecute Kayla on a welfare fraud charge, a Class A felony.

Instead, prosecutors wrote that they anticipate on Tuesday to file a new charge — theft by deception, also a Class A felony — and eight, unspecified misdemeanor charges.

Police announced on Tuesday that rewards for information leading to Harmony’s location have hit $100,000.

“The Manchester Police Department is overwhelmed by the public’s generosity and support during this ongoing investigation,” officials wrote in a Facebook post. “We continue to work around the clock to locate Harmony and we encourage anyone with information to call our dedicated tipline at 603-203-6060.” 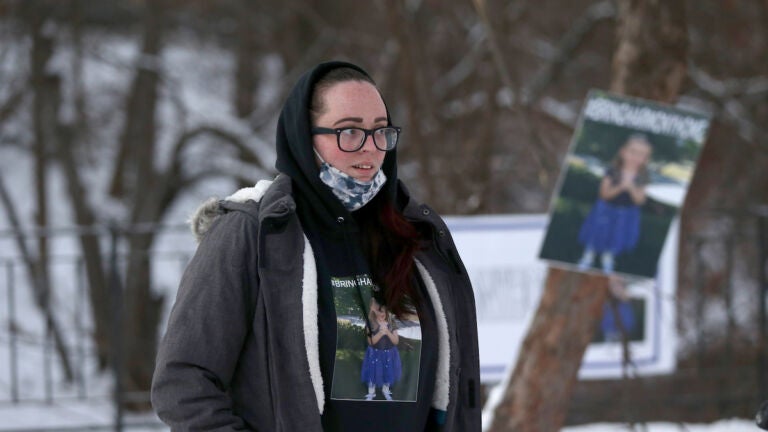