Before you can enter the bright orange front doors of Seed, you must show your ID to Sam Robriguez, the dispensary’s concierge who sits on a stool underneath an umbrella. If you’re over 21-years-old, you can go in.

You’ll follow the metal stairs down into a large room with sleek silver floors and vibrant colored lights. To the right, there’s a floor-to-ceiling mural of pink and red and blue and green. Reggae music plays softly in the background.

Seed, and Core, is part marijuana dispensary, part social justice museum located in Jamaica Plain. The business is the first of its kind in Massachusetts – a museum dedicated to educating the community on the impact of cannabis prohibition and the war on drugs.

“We have this juxtaposition of the hypocrisy of incarceration in America immediately adjacent to legal cannabis for sale,” said April Arrasate, the CEO, founder, and owner of the business.

Opening their business almost one year ago in March 2021, Arrasate and her team wanted to bring attention to the benefits of using cannabis, while simultaneously educating buyers on its dark history in America.

Since 2012 when Colorado became the first state to legalize the sale of recreational cannabis, there has been a rapid national reckoning.

Now, 80 percent of states have at least decriminalized cannabis, and some cities within the 10 states where the drug is completely illegal are moving to decriminalize it. Plus, federal decriminalization could be on the verge.

Yet, the impacts of the war on drugs can still be seen today even within local neighborhoods.

According to the team’s research, 1 in 3 Black men born after 2001 end up in prison for marijuana-related crimes, along with 1 in 6 Latino men and 1 in 17 white men – despite the fact that cannabis use is similar across ethnicities.

Now that the drug has been legal in Massachusetts since 2016, and local shops are popping up across the state, Arrasate’s store and museum pay homage to the progress made over the last ten years that enabled them to open their shop in the first place.

In the center of the space sits a 6-by-9-foot replica of a jail cell – the same size as the ones cannabis users could be locked in if arrested before it was legalized. The barred cell doors were taken from an old prison in Belmont.

On a screen, Niambe Tosh, a member of the museum’s Curating Council and daughter of reggae singer Peter Tosh, tells the tragic story of losing her older brother Jawara to the war on drugs.

“The jail cell is a reminder of how people still go there,” said Tomas Gonzalez, the business’ chief of staff who grew up in the neighborhood.

Behind the jail cell is a large circle mounted on the wall, full of confiscated cannabis paraphernalia sourced from local prisons. Bongs, pipes, grinders, rolling papers, ashtrays, and lighters – all previously used – are attached to the wheel: a symbol of the iconic “puff, puff, pass” ritual of a joint circle. It represents a “culture unified by paraphernalia,” as Gonzalez said.

On the other side of the space is a wall lined with six large perfume spray bottles. Inside each bottle are extracts of one of the six most prominent cannabis terpenes – the compound of the plant that gives it its distinct smell.

As you squeeze the pump and take a whiff, natural scents with hints of lemon, pine, or lavender act as aromatherapy, and educate the public on the scientific natural compounds existing within the drug.

Discovering the benefits of cannabis

When Arrasate’s mother passed away from breast cancer in 2011, she realized how beneficial cannabis could be to patients.

In honor of her mother’s passing, she left her practice as an attorney in 2014 and started Cure Leaf, a medical cannabis business in Connecticut. The Constitution State legalized medical marijuana in 2012 but legalized recreational use in July 2021.

“I was just a grieving daughter sort of looking to transition my legal practice into some sort of patient advocacy,” she said.

She hired her brother and sister, and the store was a success. She ultimately sold the company a few years later, and still remains a shareholder.

“The reason I feel like it was successful and that it did so well is because I was driven by a mission,” she said. “And everyone around me was as well. Everyone understood that we were there for a very real reason.”

Once the drug became legal in Massachusetts, she saw another opportunity. She gathered a team – Gonzalez, who grew up in the area of Jamaica Plain, and Peri Higgins, a longtime business consultant who wanted to break into the cannabis industry.

They received their host community agreement, the approval they needed from the city to open, in 2019.

The space was previously The Milky Way Bar – a long-standing staple of the neighborhood.

One of the first times that Arrasate walked down the stairs into the empty space, she noticed two large pillars in the middle of the room that were too close together. She stood there for a moment, grabbed a piece of chalk, and started drawing a 6-by-8-foot square on the floor.

Thus, the idea for the museum, in addition to the shop, was born. They created a group of community leaders and locals impacted by prohibition that would eventually become the museum’s Curation Council, the group that proposes and creates new exhibits. They partnered with members of the MFA to ensure an authentic and effective museum experience.

The surrounding neighborhood is a major component of the store’s identity. The business has over 100 investors, 82% of whom live in the local community while 81% are people of color. Many investors grew up in the area with Gonzalez. The business is 72% women-owned. Collectively, the members of the business spent over 10 years incarcerated from the war on drugs.

“It was important for us to be able to provide opportunities to individuals who typically would not be able to invest in a cannabis business,” said Higgins, the CFO of the business.

The team received their provisional license, which allows them to prepare the business for operation, in March of 2020, and just over a year later, in the midst of the pandemic, they finally opened their doors.

Now, members of the community can purchase cannabis, learn about its troubled past and educate themselves on the science behind the drug all in one place.

“Here’s a very complex issue, having to do with incarceration and power and control and money,” Arrasate said. “And I got to distill it down to something that’s impactful enough to make you remember this and explore it further.” 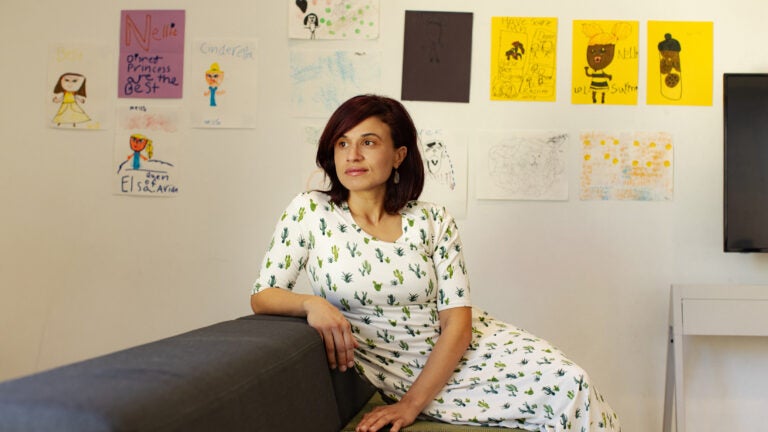