Over the weekend, dozens of traffic cones that were placed on the Massachusetts Avenue bridge mysteriously ended up in (and on) the Charles River.

On both Friday and Sunday nights, vandals moved the cones, according to a statement from the Massachusetts Department of Transportation (MassDOT).

“A large number of the cones in place for the Massachusetts Avenue Bridge Bicycle Pilot were vandalized by being thrown into the Charles River, disrupting the traffic setup, littering the river, and endangering all roadway users,” said Kristen Pennucci, the communications director for MassDOT, in a statement.

The cones have since been replaced.

In November, MassDOT launched The Massachusetts Avenue Bridge Bicycle Pilot program that turned the four-lane road crossing the Charles into a two-lane road with bike lanes on both sides. The bike lanes are separated from traffic using cones.

According to Pennucci, the bike lanes aren’t separated from traffic in a more permanent way yet because “this is a pilot to evaluate the longer-term impact of a larger and more permanent bike lane on the bridge.”

“MassDOT asks anyone with any information to please contact law enforcement and to remember that these cones provide a crucial safety feature while the pilot continues, and a permanent treatment can be developed,” Pennucci said in the statement.

The bike lane pilot program is part of an effort to make travelling by bike safer on Massachusetts Avenue. The cones and temporary signs will remain in place through the winter months to evaluate the impact of the plan.

“This creates a hazard for all road users and is polluting the Charles,” Gulliver tweeted. 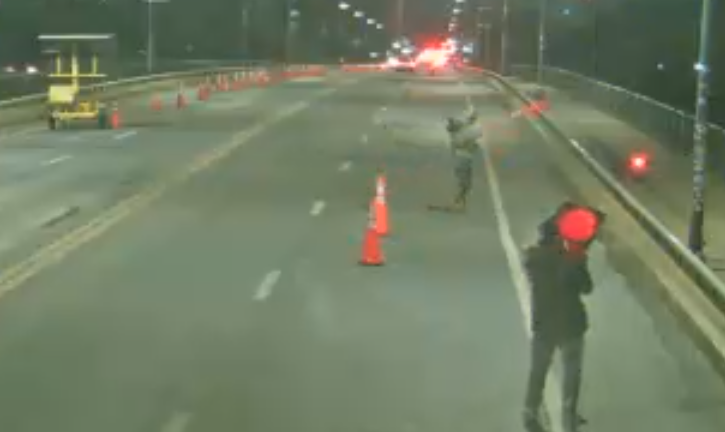