The lanes were just wide enough for a single vehicle in each direction. Its steel beams were much more practical than charming.

When it was constructed in 1983, the bridge, after all, was to be a “temporary” crossing.

Decades later though, the rusty looking, road-warn thoroughfare still stands, with its appearance — a patchwork of asphalt and eroded double yellow lines — earning it something of a bad reputation.

“It just instantly felt like a deathtrap,” said Congresswoman Lori Trahan, describing how her road-race training runs usually took her across the eyesore crossing. (She usually sprinted across, she said.)

About 27,000 vehicles traverse the Rourke Bridge daily, even while state officials acknowledge the structure is “showing signs of deterioration.”

Yet if there was ever a reason to make the Rourke Bridge a marquee of anything at all, that reason arrived Thursday, as Gov. Charlie Baker, Trahan, and other public officials from across the state outlined how Massachusetts plans to use its influx of over $9.5 billion in federal infrastructure funding in the coming years.

In all, the Baker administration intends to funnel $5.4 billion toward highways, roads, and bridges; $2.2 billion to the MBTA; $591 million to regional transit authorities; and $1.4 billion to environmental-related infrastructure upgrades, among other initiatives.

And yes, officials have earmarked $170 million to replace the crumbling Rourke Bridge — one of 146 bridge repair or replacement projects across some 181 structures totaling $1.1 billion.

“This is probably what we would consider to be long overdue,” Baker said at the UMass Lowell campus on Thursday, not far from the bridge in question. “It’s been on our radar for quite a while. There’s been a lot of pre-work done on it. And for us, this is, in some ways, the perfect project and the perfect place to kick off what we expect and anticipate will be an enormous amount of activity over the course of the next 10 or 12 months.”

The new cash, awarded under the bipartisan infrastructure law championed by President Joe Biden last year, also comes paired with a chance for states to compete for a slice of an additional $110 billion. The Baker administration said that money could help finance major projects like the replacement of the Cape Cod bridges and the Mass. Pike multimodal project in Allston.

In the meantime, funding already reserved for Massachusetts is expected to come in over the next five years.

Baker, on Thursday, outlined a sweeping agenda from the eye-catching initiatives like the new MBTA vehicles to the mundane, such as his administration’s efforts to swap out the public transit agency’s signal system.

The latter project encompasses rather “invisible” changes Baker theorized had long been overlooked by elected officials because they’re hard to show off to constituents.

“You get no credit for it,” he joked.

But still, the new cash is propelling the chance for some “really cool projects” to take form, Baker said.

Materials from Baker’s office outline the federal law boasts $66 billion to make much needed repairs to Amtrak’s system, including the northeast corridor that connects Boston to New York City and Washington, D.C.

Included in that sum are competitive opportunities for Massachusetts to snag some extra cash, which Baker wants to use to improve rail service between Springfield and Worcester — “an initial step” toward expanded east-west rail service between Boston and Albany, officials said.

As for the MBTA, Baker is envisioning $412 million for stations and facility enhancements, such as the Quincy bus facility and the Codman Yard expansion in Dorchester.

Another $852 million is being considered for revamping the agency’s fleet, particularly with new Green Line trains and 80 battery electric buses. An additional $295 million would go toward the system’s bridges and tunnels, and $428 million would fund signal and other system upgrades.

In the coming weeks, the administration will put forth a transportation bond bill to the Legislature to help match the federal funds with state resources.

“We’re awaiting further guidance from the feds on sort of the rules of the game for a lot of this, but you can count on the minute they put out the rules associated with how a lot of this works, we will move very quickly to put it to work for the people here in Massachusetts,” Baker said. 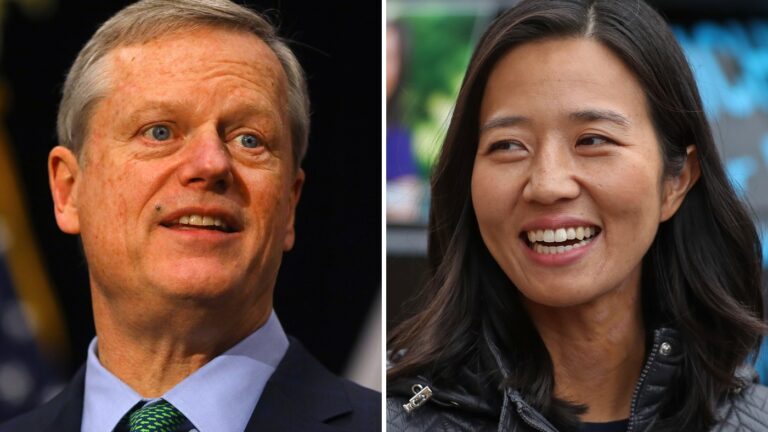