A veterans’ home in Middleborough caught fire early Tuesday morning, sending both a man who was trapped in the home and the state trooper who rescued him to the hospital.

While firefighters were able to knock down the fire, the home is considered a total loss, so its 13 residents are now without a home.

The Middleborough Fire Department said that they were called to 285 West Grove St. for a report of a fire around 1:15 a.m. Tuesday morning. The veterans’ home at that address is a three-story building called Acorn Hill Home.

When firefighters arrived, they said they saw heavy flames coming from the top two stories of the home.

A state police trooper was the first person on the scene, and he discovered a man trapped on the third floor of the home. The trooper used a ladder he found onsite to help the man climb out a third-floor window.

Both the trooper and the man were taken to a local hospital for treatment.

Meanwhile, fire crews mounted an aggressive exterior fire attack, then went inside to finish extinguishing the fire. The fire was under control within 45 minutes of crews’ arrival, firefighters said.

The other 12 residents of the home were able to flee the building on their own. Two of these occupants were evaluated but declined to be taken to a hospital.

The home is considered a total loss due to heavy fire and smoke damage. As a result, the 13 residents of the home have been displaced and are being assisted by the American Red Cross.

The cause of the fire remains under investigation by authorities. 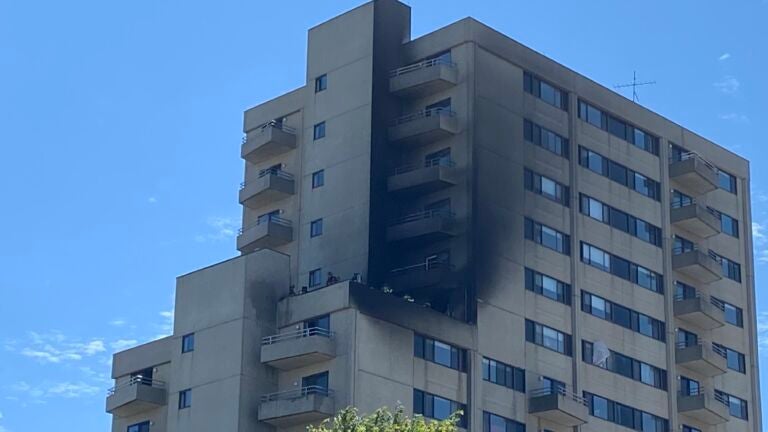