Five people were arrested Monday after holding a protest of Raytheon Technologies at the weapons manufacturer’s building in Cambridge — a demonstration apparently aimed at the company’s involvement in global conflicts, including the escalating Russian war in Ukraine.

Around 8:15 a.m., Cambridge police and fire departments responded to reports of a “small group of protestors” on the roof at the Moulton Street facility and another crowd of 20 to 30 people outside the building, Jeremy Warnick, a police department spokesman, said in an emailed statement.

“For nearly four hours, officers attempted to communicate with and escort protestors — who were locked together and had used smoke devices — off the roof of the Raytheon building,” Warnick wrote. “However, they refused to cooperate and were later arrested.”

Five people, who were not identified, were charged with breaking and entering daytime for a felony; vandalizing property; and trespassing, according to Warnick.

“The remaining protestors left the area shortly after the arrests were made,” Warnick wrote.

The five individuals charged were expected to be arraigned in Cambridge District Court following processing by Cambridge police.

The protest was organized by two groups, the FANG Collective — which advocates for “a decolonized world free of prisons and police,” its website says — and Resist and Abolish the Military Industrial Complex, or RAM INC.

RAM INC, following the arrests, alleged on Twitter those charged were “being intimidated and denied water in jail.”

“The defendants, like anyone taken into our custody, have been provided with water and have bathroom access, if needed,” Cambridge police said.

Both groups posted about the demonstration on Twitter, with videos and photos of protestors holding signs and banners, including some that read, “Raytheon profits from death in Palestine, Yemen, & Ukraine” and “End all wars / End all empires.”

One protester, who can be seen and heard in one video, said the demonstration marked the day after the 19th anniversary of the 2003 invasion of Iraq by the United States.

“We are here today because Raytheon Technologies and [its] missile defense systems is a purveyor of death,” the protester says. “… We are here today to expose the war…crimes and atrocities committed by Raytheon in conjunction with the U.S. government.”

Protestors cited Raytheon’s contracts to build weapons for use in Israel and Saudi Arabia, and highlighted how its missiles — and other weapons manufactured by American contractors — have been found to be connected to the deaths and displacement of civilians.

In recent weeks, Raytheon’s Javelin anti-tank missile has become a crucial, American-supplied weapon as Ukrainians seek to buck the Russian invasion of their country.

Raytheon’s stock price had surged by 5 percent as of last week since the start of Russia’s war in Ukraine last month, according to The Boston Globe.

A spokesperson for Raytheon did not immediately return request for comment on Monday afternoon.

The FANG Collective organized a similar protest in August at a Raytheon facility in Rhode Island, where activists blockaded vehicle entrances. 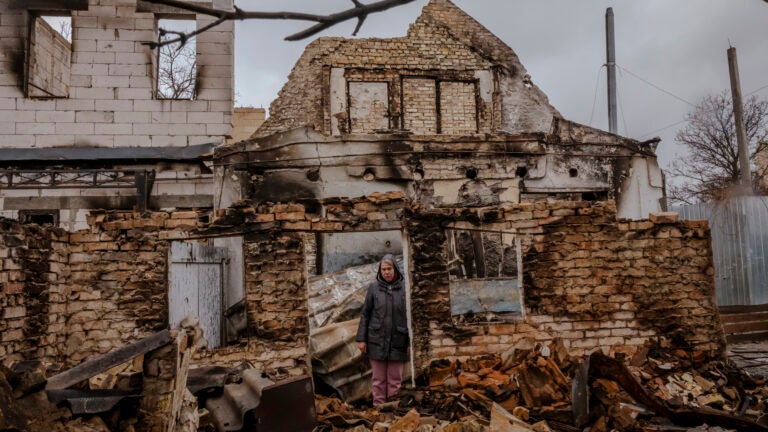