A group of about 20 people wearing neo-Nazi insignia made an appearance on the route of South Boston’s St. Patrick’s Day parade Sunday, upsetting many onlookers, parade organizers, and local officials.

The group stood on the sidelines on West Broadway and displayed a sign that read “keep Boston Irish.”

They also wore masks with the number 131, a calling card for the Nationalist Social Club, which has been identified as a neo-Nazi group by both the Counter Extremism Project and the Anti-Defamation League (ADL). The number is the alphanumeric code for ACA, or Anti Communist Action, and is frequently used by the group.

One member of the group carried a black flag with a white plus sign inside a circle. The symbol, which is sometimes called a sun cross or incorrectly called a Celtic cross, is a commonly used white supremacist symbol, according to the Anti-Defamation League.

The actual Celtic cross is not a hate symbol, and is a symbol of Christianity used in Ireland, Cal Farley, an investigative researcher with the Anti-Defamation League’s Center on Extremism told The Boston Globe.

The version of it used Sunday, in which the cross is squared off instead of tapered ornately within the circle, is oft-used by white supremacist groups.

Parade organizers told the Globe that the group was “neither invited, nor welcome at our parade.”

“As a Jewish American, it hits especially close to home for me,” Dave Falvey, commander of South Boston Allied Veterans Council, said in an e-mail to the Globe Monday.

“Unfortunately, we only have control over who can participate in the parade and cannot control who attends. Such groups will never be welcome in any capacity at the South Boston St. Patrick’s Day / Evacuation Day Parade.”

Boston Mayor Michelle Wu also denounced the group in a statement on Monday.

“It was deeply disturbing to see this display at a local celebration of culture and heritage, as we work to heal and build community through our recovery,” Wu said.

“With the growing intensity of white supremacist groups nationally, we are working closely with law enforcement at all levels — Boston will not tolerate hate crimes, and we will not be intimidated in our work to build a city for everyone.”

Sightings of white supremacist propaganda have increased dramatically in the last five years, the Anti-Defamation League reports. The organization’s researchers found 4,851 reported cases in 2021, which is down about 5% from 2020, but is more than 16 times the 294 cases reported in 2017.

Reported hate crimes also have risen. In 2020, the FBI reported its highest surge of hate crimes in 12 years.

“We are disgusted by reports of outside hate groups descending into Boston for the St. Patrick’s Day Parade yesterday. Their ideology is repugnant and contrary to an event that celebrates our proud immigrant history and is enjoyed by children, families, and people of all ethnicities and backgrounds,” the delegation wrote.

“…As a city and Commonwealth we must confront and stop hate, racism and discrimination everywhere it exists.”

The owners of Sully’s Brand, a Beverly-based sports apparel company, said in a statement Monday that they were horrified to see a member of the group waving a flag they created. The flag is a play on the Irish flag, with green and orange fields and a large white shamrock in the middle.

“Sully’s Brand emphatically denounces this group and their cause,” the owners wrote. “Irish immigrants were not met with compassion and acceptance when they first came here in the 18th century and the notion that we should repeat that prejudiced behavior is ridiculous and disgusting.”

This past St. Patrick’s Day parade was not the first time the National Socialist Club’s symbols have been brandished by people in the Boston area. Similar displays have been seen outside Brigham and Women’s Hospital, outside a nonprofit library in Providence, and at a theater hosting a drag story hour for children in Portsmouth, N.H.

According to the ADL, the group was formed in 2019 in eastern Massachusetts and claims to have small, independent groups throughout the country and in Europe.

While the groups’ beliefs and speech are widely considered offensive, their demonstrations are constitutionally protected, and they often focus on spreading their message Farley told the Globe.

“They’re very much concerned with optics,” he said. “I’m not trying to say they’re harmless, obviously. But they don’t have the same violent rhetoric that maybe other extremist groups do.”

If members of the public are able to identify hate symbols, they can make others in their communities aware of a hate group’s presence, which can help keep people safe and tamp down their influence, Farley told the Globe. 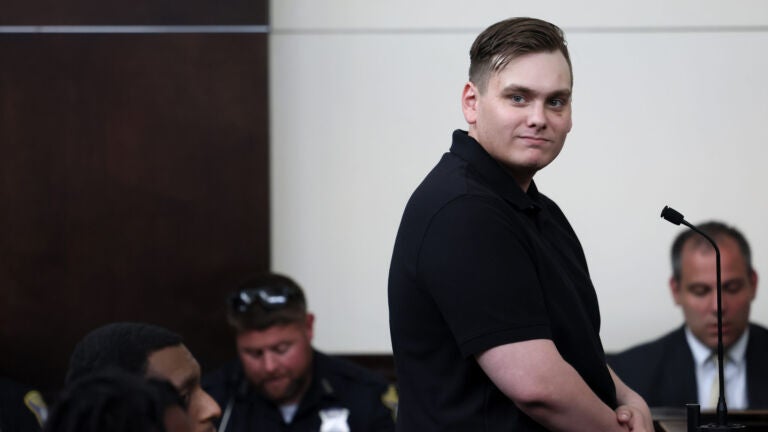