This year’s Transgender Day of Visibility brought a crowd of supporters, allies, and advocates to the front of the Massachusetts State House for an event called “We Are A State of Love: A Gathering of Visible Solidarity With LGBTQ Youth.” For about an hour, amid cheers and applause, lawmakers and advocates spoke passionately about the importance of protecting LGBTQ rights, especially in light of recent efforts to do just the opposite in states across the country.

Craig Martin, Massachusetts Commission on LGBTQ Youth co-chair, kicked it off and reminded attendees that the criminalization of health care, education, and support for LGBTQ youth only makes worse the mental health challenges that queer youth already face.

“We stand here today, united by a fervent and unapologetic love for thousands of lesbian, bisexual, gay, transgender, queer, intersex, and asexual youth across our state and nation. May you always find liberation in the light and beauty,” Martin said.

The rally, hosted by the Massachusetts Commission on LGBTQ Youth, came just a few days after Gov. Ron DeSantis signed a bill coined “Don’t Say Gay” by opponents into law in Florida, less than two months after Texas Gov. Greg Abbott issued an executive order to the Department of Family and Protective Services to investigate parents of trans children, and within weeks of Iowa Gov. Kim Reynolds signing a transgender sports ban.

Though Massachusetts does not currently have any active anti-LGBTQ bills, lawmakers and advocates who spoke at the rally emphasized that the work to protect LGBTQ rights is still not done.

“Across the United States, hundreds of state-sponsored bills have been drafted to actively discriminate, dehumanize, terrorize, and erase millions of queer, nonbinary, and transgender youth and their caregivers and teachers, and we all should actively be protecting and uplifting them for their livelihood is absolutely necessary to create a more welcoming and inclusive world,” Martin said

Martin was joined at the podium by a number of state lawmakers including Sens. Julian Cyr and Jo Comerford, as well as Grace Sterling Stowell, the executive director of BAGLY. All who spoke expressed their support for the LGBTQ community, many echoing the phrase, “We see you, we hear you, we love you.”

The crowd proudly waved pride flags and held signs reading, among others, “Protect LGBTQ youth here and everywhere” and “Beyond the binary.”

“I can actually think of nothing that would scare bigots more than seeing us here celebrating today on this Trans Day of Visibility. Nothing would scare them more. Maybe other than like a children’s book, but that’s conversation and a speech for a different day,” said Rep. Jack Patrick Lewis.

Rep. Kate Hogan, who is the House speaker pro tempore, reminded the crowd that fighting harassment and intolerance is a collaborative effort.

“Advancing civil rights is a journey of many miles, many bills, and many investments, and we must keep fighting to protect the rights of our most vulnerable,” Hogan said. “Please join me in that fight and celebrating life, especially the lives of millions of transgender people in our communities. Join me in supporting not criminalizing medical care for trans kids and honoring their parents.”

After hearing from several lawmakers, Alia Cusolito took the podium. Cusolito is a member of the Massachusetts GSA Leadership Council and a high school student from southeastern Massachusetts who is very involved in advocacy efforts.

Cusolito reminded listeners of the wide reaching effects of anti-trans and anti-LGBTQ legislation.

“The real motivation for these policies is never about protection, but about excluding trans people from yet another public space,” Cusolito said. “It’s so important that we protest the anti-trans legislation because it will harm more queer kids. Trans people have always been here, and we will always be here. We can’t be erased so please stop trying.”

They are also involved in an organization called Queer Youth Assemble that led a nation-wide walkout from school March 11 to protest attacks on queer youth.

“To all the queer youth out there — especially my fellow trans people — I want you to know that you will be OK. You have support. When you say who you are and what you need, you deserve to be heard. If you’re feeling unsafe, talk to someone, you can even reach out to Queer Youth Assemble by emailing or messaging us,” Cusolito said. “There’s so much more to life than what we’re seeing now. And there are millions of people who support you. I promise there is hope for you. There is a place for you. I love you, and you are beautiful and powerful. We won’t stop fighting for you until every single person is safe and supported.”

The crowd drawn by the cause was diverse, with a wide range of ages, backgrounds, hometowns, and identities, but here is what a few attendees told Boston.com about why they came to the rally.

Rev. Catie Scudera from First Parish in Needham, a Unitarian Universalist congregation, was joined by other staff members from the church as well as a congregant, who all felt moved to come and support LGBTQ youth.

“As Unitarian Universalist staff members and lay leader, we very strongly support the LGBTQ community and especially our trans and gender queer youth at this time when across the country there are so many laws trying to prevent them from safely existing,” Scudera said. “We don’t want just tolerance in our communities, in our country, but actually enthusiastic acceptance and inclusion.”

The group from Needham agreed that hearing from Cusolito and seeing all the elected officials come out in support were highlights — though a giant dog who was in the crowd also was a favorite.

“Our first [Unitarian Universalist] principle is the inherent worth and dignity of all people, and I think our coming out here to support LGBTQ youth in Massachusetts and across the country is definitely a part of that witness for us,” said Jenna Crawford, the apprentice minister.

Cas Martin, a master’s student at UMass Amherst from Williamsburg, said it took him about two-and-a-half hours to get into the city, but that he wouldn’t have missed it “for the world.”

“I am feeling really lucky to live in a state like Massachusetts. I’ve been looking at what’s happening around the country, especially in Texas and Florida, and my heart is really breaking for the trans folks, especially young trans people who aren’t able to be their full and authentic selves,” Martin said. “I feel so lucky, I can have my big trans flag on my back and I can use my name and pronouns and feel totally safe.”

Martin called the event a historic event and said he hopes it starts to happen every year and that it sends a message to other states that they need to step up.

“I am very passionate about supporting movements to make sure that other folks have those rights,” Martin said. “It’s really cool to be in a state where so many legislators are coming out and voicing their support when the opposite is happening in so many other places.”

A highlight of the gathering for Martin was also hearing from Cusolito. He has been working with Cusolito as an intern at the Safe Schools Program for LGBTQ Youth for about a year and said they give him hope for the future.

“It’s really remarkable to see how much has changed and how empowered young people are as activists today,” Martin said. “I know when I was in high school, I was just trying to get through as a trans person or to even acknowledge that part of myself too, so to see such an amazing student speak so beautifully about their experience and to advocate for other people with their experience, really amazing.”

Martin encouraged everybody to take the initiative to learn more about trans issues and contact elected officials if they are comfortable doing so.

Two moms, both from Walpole, came into Boston Friday morning for the same reason: They each have a child who is nonbinary that they wanted to support.

“Just to stand in solidarity with trans and nonbinary LGBT youth, because of everything that’s going on in the nation. It’s quite scary,” said Cassi Braithwait. “I have an almost 7-year-old nonbinary child, and I want them to have a better community than we have now.”

Deborah Mulroi echoed Braithwait’s thoughts and said seeing their kids stand up in front holding signs and being proud of their identities was the most impactful part of the morning.

“I have a 7-year-old [who is] also nonbinary, and we wanted to show them that there’s other children out here that are just like they are and that they have the support of not only us, but an entire community,” Mulroi said.

Braithwait said seeing older queer youth advocating and standing up for themselves was a nice preview of who her kid might become.

Standing nearby was Rebecca Minor, the owner of the large dog the group from Needham noticed. Minor is a gender specialist who works primarily with queer and trans youth and their parents and said as an ally it was important that she show up and stand in solidarity.

“It was also really nice to hear from folks speaking directly to youth, saying like, ‘The people here have your back, you’re not alone,’ and that they’re going to do everything in their power to continue to fight for them because I think a lot of times it’s feeling really hopeless for youth right now,” Minor said. “As a therapist, it’s been a really rough couple of months. Kids are struggling with this. I can’t help but think about the kids and other states who don’t have access to care like my clients do, and it’s a really scary time.” 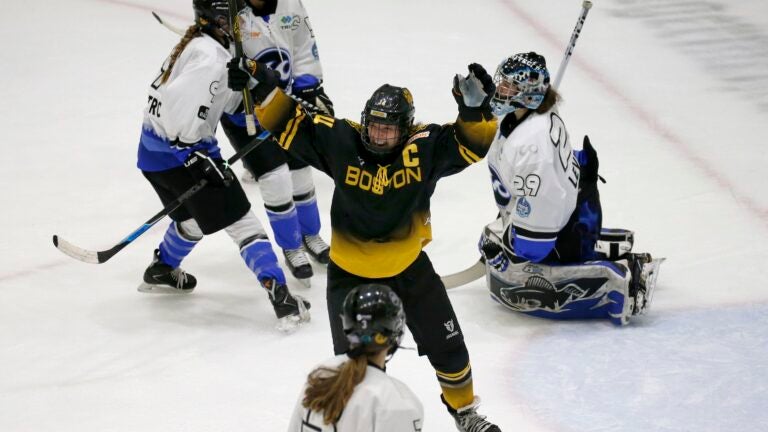