For more than a year the rainbow Pride flag and the Black Lives Matter flag have flown alongside the United States flag at a small Jesuit school in Worcester. But now, it is raising red flags for the bishop of Worcester.

In a statement released April 3, Worcester Bishop Robert McManus questioned if the Nativity School of Worcester is “committing itself to ideologies which are contrary to Catholic teaching” and if it is still truly a Catholic school.

“As the Bishop of this diocese, I must teach that it is imperative that a Catholic School use imagery and symbols which are reflective of that school’s values and principles so as to be clear with young people who are being spiritually and morally formed for the future,” wrote McManus. “While our role in a school is not to convert those who are not Catholic, nor is it our role to deny our Catholic identity.”

As of Tuesday afternoon the flags are still flying, according to school officials, who also issued the following statement.

“The Black Lives Matter and Pride flags fly below the American flag at our school to remind our young men, their families and Nativity Worcester staff that all are welcome here and that they are valued and safe in this place,” reads the statement. “It says to them that they, in fact, do matter and deserve to be respected as our Christian values teach us. That is the purpose of flying these flags.”

School officials also clarified in the statement that though the school “proudly” operates in the Diocese of Worcester, it is not a Diocesan school because it is sponsored by the USA East Province of Jesuits.

The flying of the flags is divisive in the school community too — some parents support the inclusive messaging and some parents feel it’s inconsistent with the Catholic faith.

“This is a Catholic school so there’s no problem with being strict in the Bible and what it says,” parent Benjamin Maina told Boston 25 News. “I know it doesn’t sound politically correct but it doesn’t have to. It’s OK to protect our children; that’s what I feel personally and I respect anyone who disagrees.”

“It really shows how the school is accepting of everyone so I would say, yeah, it should stay up,” Mwati told Boston 25.

One parent of a prospective student said the flags make the school more welcoming.

“I want him to be in an environment that accepts his background. And then the gay pride thing, I think everyone should be kind and let people be who they are,” Jamie Gbale told WBZ.

The Nativity School is a tuition-free, all-boys school that serves about 60 students, who are mainly students of color from low-income families.

McManus said in the statement that the Black Lives Matter flag has, for some, come to represent distrust of police, something he said Catholic schools don’t teach.

“Symbols can mean different things to different people. While the Catholic Church joins with our nation in teaching that all lives are equal before God and the law and that all lives demand our respect regardless of race, gender or ethnicity, the flag with the emblem Black Lives Matter has at times been coopted by some factions which also instill broad-brush distrust of police and those entrusted with enforcing our laws,” reads McManus’s statement.

In regard to the Pride flag, McManus said it stands “in contrast” to Catholic teachings.

“While we teach that everyone is created in the image and likeness of God, gay pride flags are often used to stand in contrast to consistent Catholic teaching that sacramental marriage is between a man and a woman,” reads his statement. 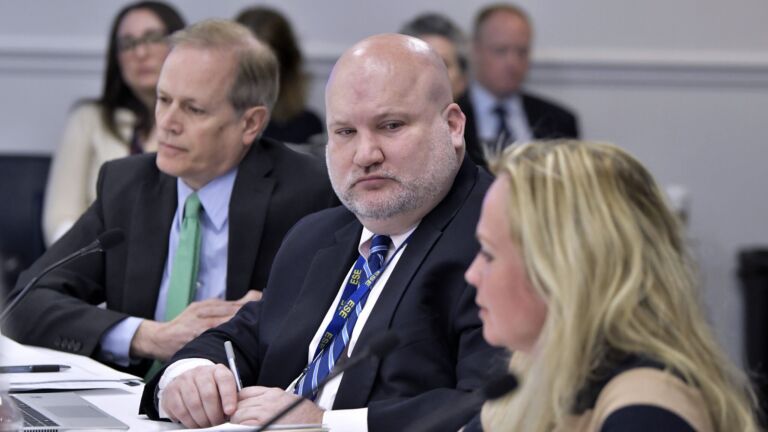