PORTLAND, Maine (AP) — Tribes in Maine gave up some of their rights to the state when they settled their land claims more than 40 years ago.

They want to change that agreement so they can enjoy the same self-governing rights as the other Native Americans.

The Passamaquoddy, Penobscot, Maliseet and Mi’kmaq view legislative debate this week, ahead of the midterm elections, as their best opportunity for establishing rights to self determination.

The proposed changes come against a backdrop of President Joe Biden’s administration seeking to ensure that tribes are consulted early when it comes to policies or actions that impact them. It also has sought ways for the federal government and tribes to co-manage federal land that is part of tribes’ ancestral homeland.

But unlike the hundreds of tribal reservations across the United States, the Passamaquoddy’s and Penobscot’s three reservations in Maine are governed like municipalities and bound by state laws under the Maine Indian Claims Settlement Act of 1980.

In Maine, the larger Passamaquoddy and Penobscot tribes operate their own police departments and health clinics but don’t have full autonomy over matters on their land. The state and tribes have butted heads on environmental, fish and wildlife rules.

Change could come with votes in the state Legislature starting Tuesday.

One of the bills would amend the land claims act to ensure that tribes have control over their land that’s comparable to other tribes in the U.S. Of the 574 federally recognized tribes in the country, about 325 have reservation land.

Another bill would ensure the Passamaquoddy Tribe at Pleasant Point can regulate its own drinking water, drilling wells on land owned by the tribe, for example, and working with the U.S. Environmental Protection Agency instead of being bound by state regulatory agencies.

On Monday, about 300 tribal members and supporters gathered at the State House and marched to the home of Gov. Janet Mills, who’s opposed some aspects of both proposals.

One of the speakers, 19-year-old Passamaquoddy Noela Altvater, told the crowd that clean drinking water is available virtually everywhere in Maine — except on the Pleasant Point reservation where she’s grown up.

“Our community has been stripped and kept from this basic need for our entire existence,” she said.

Chief Maggie Dana of the Passamaquoddy Tribe at Pleasant Point, also known as Sipayik, put it in stark terms.

“Our culture is clear — water is life. And for the Passamaquoddy people at Sipayik, it is poison,” Dana said.

For the tribes, it has been a long, frustrating battle since they traded some rights to the state under an $81.5 million settlement that was signed by President Jimmy Carter in 1980. The settlement can be changed, but only with the agreement of both the state and the tribes.

That settlement for the Passamaquoddy, Penobscot and Maliseet, along with a 1991 agreement for the Mi’kmaq, all federally recognized, put the Maine tribes on a different footing from tribes elsewhere across the country.

In Maine, opponents fear unintended consequences, like tribes flexing their muscle on environmental, fish and wildlife, and economic development.

That’s one of the reasons why Maine’s Democratic governor has not warmed to the sovereignty bill. If it’s approved, she might veto it.

A spokesperson said the governor is committed to improving drinking water quality by working with the local water district, Passamaquoddy Tribe, and the federal government. But Mills didn’t appreciate one tribal leader’s suggestion that she was offering “beads and trinkets” instead of substantive proposals.

“The governor is focused on bringing people together to solve problems, not trading insults at press conferences,” spokesperson Lindsay Crete said.

Despite the governor’s opposition, the tribes still see this as their best chance, potentially for some time, to get the bills passed because they have the support of Democratic leadership.

With the midterms coming up, Republicans could take control of one or both Democratically controlled chambers in the State House, along with the governorship, hampering efforts to press forward with the proposals.

Maggie Dana said the tribes have been educating lawmakers and creating alliances, and they’re hopeful for change.

It’s time for the state to live up to its motto Dirigo, which is Latin for “I lead,” instead of being last to expand the rights of Native Americans to the same rights enjoyed by others, Dana said. 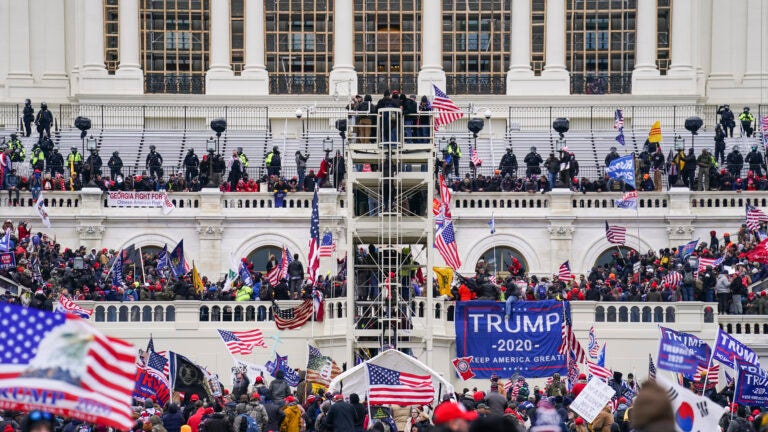 Maine man arrested for alleged role in Jan. 6 attack on the Capitol