Usually when Lester Foss, who owns Island Towing and Auto Repair in Maine, gets a call from the Bar Harbor Police Department about a vehicle stuck on the beach, it’s not too complicated. Usually his team can head down, use a pickup truck with a big winch, and pull them off the sand bar.

But a call Foss got over the weekend was a bit more complicated.

“[This car had] actually driven around up into a cove and then out onto the mud flats,” Foss told Boston.com. “It was stuck at the low watermark. But the low tide had already come back in and the water was, at that point, up to the bottom of the headlights.”

The car in question was a 2021 Ford Bronco stuck in Frenchman Bay near Bar Harbor, Maine. The driver was Jason Stonge, from New Jersey, according to the Bangor Daily News. He called Bar Harbor police Saturday at 5:42 p.m. according to authorities.

The owners were new to the area, Foss said, and were there for Easter.

“They saw people out there, you know, in their vehicles driving the bar,” he said. “For some reason they felt that they could go further. Not sure why they decided to make a U-turn on the mud flats, but that was a big mistake.”

The car was about 700 feet off from the nearest point of the shore and at least 1,500 off from the sandbar, Foss said.

All in all, he said the recovery operation took 28 hours, with the car finally removed from the bay Monday evening.

The first attempt by Foss was Saturday.

“I offered one shot to try and pull it out,” he said. “I asked the owner if he was willing to walk a cable out and hook a cable to it. He was; I let him walk a cable out. I gave it a pull, and I broke the cable almost instantly, which is a seven sixteenths cable. He re-hooked it, and I broke it again. And I said at that point, ‘This is a recovery for the next tide.’”

Throughout the process, the owner was about 150 feet away from Foss, so he said communication was a bit challenging.

“Normally when a vehicle is stuck like that the wheels will roll … This truck was a Bronco — it has lockers front and rear, and [the owner] had the lockers in and he had it in four wheel drive,” Foss said. “But what he failed to do that particular night was take the emergency brake off.”

The next day, at low tide, Foss went back with two trucks and winches. Rather than succeeding at recovering the car, the efforts during that tide resulted in one of Foss’s trucks getting stuck.

At the evening low tide, they were back at it again.

“We were totally equipped to pull it out with two trucks, two winches, lots of cable, lots of materials to help us, and we managed to drag the Bronco about 150 feet towards shore,” Foss said. “But, at some point it got stuck on something, and it just held tight.”

The crew had about 48,000 pounds of winching power, but the Bronco would not budge. Instead, it was pulling the trucks toward it.

Usually in that situation, Foss said they would anchor the trucks to something nearby, but there wasn’t anything within about 500 feet that they could use.

The team had to call it off for the night and, in collaboration with the Department of Environmental protections (DEP), called in reinforcements.

Foss said they really had two options at the time: hire a diver or call in a barge company to lift the car with a crane.

DEP and Island Towing and Auto Repair ended up calling in a diver that DEP usually uses for flotation. The next morning they walked out to the vehicle and attached airbags to float the car.

“At high tide we chartered a lobster boat, with a small skip,” Foss said. “The lobster boat got as close as he could, then the little skip went and grabbed the tow line, took it to the big boat. The big boat then towed it as close to a nearby sandbar. Then the little boat — which struggled to move it, but it moved it — got the Bronco positioned over the sandbar, and then we deflated the bags and sunk it back into the ocean.”

When the tide went out, Foss was able to back a tow truck up to the car and load it up.

Foss said normally they would have had another option: calling in an excavator. But DEP does not allow excavators on the mud flats, which makes sense, Foss said, because if an excavator gets stuck the options are very limited.

Kip Wing, a drone operator who runs Aerial Aesthetic, was there for most of the process and said he felt two main feelings from those who gathered to watch.

“I think a lot of the longtime locals, they have a sense of frustration, because this could be prevented and this is like their backyard,” Wing told Boston.com. “I think their concern is the ecosystems being disturbed, pollution, people leaving trash — there’s signs down there and it should be prevented.”

There is an area nearby that people are allowed to drive across the water to Bar Island on the sand bar, but this car was not close to that, Wing sad.

“On the other hand you have the people that aren’t from here that were down there,” he said. “To them it’s kind of like a joke, they’re like, ‘Oh, somebody really messed up today.'”

Now, the car is sitting in Island Towing and Auto Repair’s impound lot until the insurance claims go through, Foss said.

“The Coast Guard and DEP were very nice about it,” he said. “It was a minimal impact on the environment as far as leakage goes, so the Coast Guard basically just said, ‘We filed it, don’t let it happen again.” 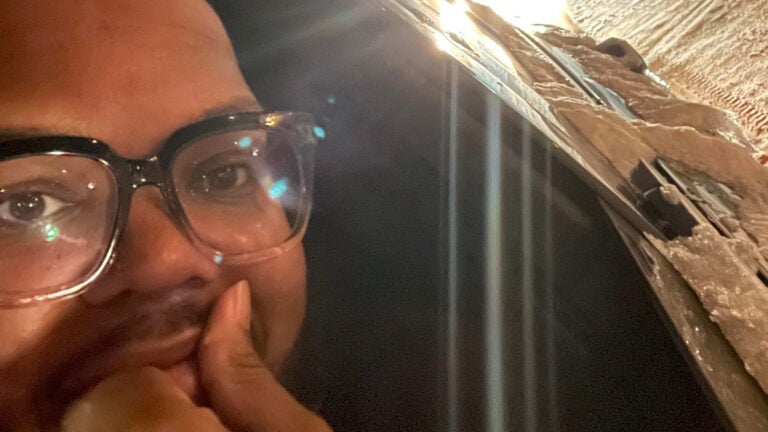