In what is perhaps the most delightful law to ever be passed in Massachusetts, Gov. Charlie Baker signed a bill Monday that solidified Podokesaurus holyokensis as Massachusetts’s official state dinosaur.

Massachusetts residents have Rep. Jack Lewis, of Fitchburg, to thank for coming up with the idea to designate a state dinosaur.

“While this project only accounted for a small percentage of my time spent as your state representative, I am proud of everything this inspired & look forward to partnering to continue to find new, creative ways to help make the legislative process more accessible and, yes, fun,” Lewis wrote in a tweet Monday.

It all started when Lewis was trying to think of COVID-safe activities to help entertain his child’s cub scout group. A lifelong dinosaur enthusiast, he quickly became interested in an activity related to dinosaurs, which sparked the idea to bring dinosaurs to the State House.

In February 2021, Lewis announced that Podokesaurus was the clear winner, having garnered about 60% of 35,000 votes.

Podokesaurus was a tiny little guy who is estimated to be about one-foot tall and about three-feet long from head to tail. It was a small theropod, meaning it was a bipedal carnivore with a body shape similar to that of the T. Rex and the velociraptor.

The tiny dino lived during the mid-Jurassic period, about 195 to 180 million years ago, in modern-day Massachusetts, and its name means “swift-footed-lizard.”

Podokesaurus was discovered by Professor Mignon Talbot, one of the first women to earn a Ph.D. in geology from Yale University and also the first woman to become a member of the Paleontological Society. Talbot taught geology and geography at Mount Holyoke College.

When walking with her sister one day near Mount Holyoke in 1910, Talbot spotted a dinosaur skeleton embedded in a sandstone boulder, which was a huge discovery. That day she became the first woman to find a nearly complete dinosaur skeleton.

Talbot named it Podokesaurus holyokensis in 1911, but the specimen was destroyed in a fire in 1916, and no other specimens have ever been found.

“There is also such great energy around how this project can not only elevate Professor Mignon Talbot, and make sure that her story is more well known, but also how to ensure that fields like paleontology, which historically have not been fields of study that women have been attracted to in the same numbers as men, but how we can reflect on the role of women in science and the role of inspiring today’s younger generation of women,” he told the news site.

Massachusetts is now the 13th state to designate a state dinosaur. 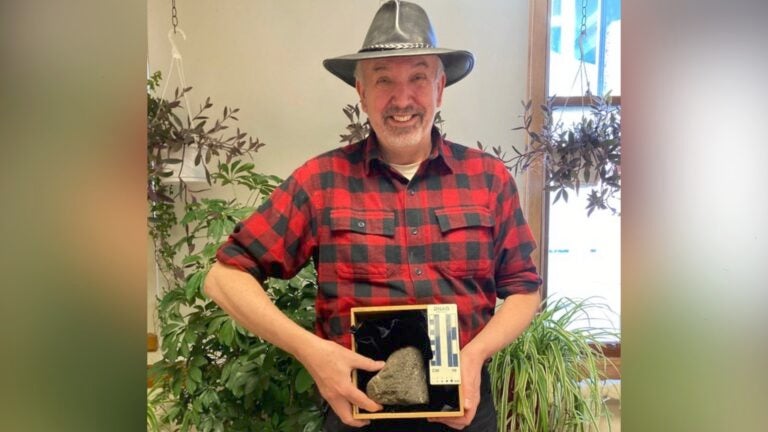