Native mascots have been the subject of fierce debate in recent years.

The Washington football team, which formerly had a Native mascot, announced their new mascot as the Commanders in February, marking one less Native mascot on the national stage. But the local Native American community is left wondering when that change will come to Massachusetts schools and towns.

“The primary goal, which was a goal when I was a student… is to humanize American Indian people,” said David Shane Lowry, a member of the Lumbee Tribe and a distinguished fellow in Native American studies at MIT.

Lowry said that he believes a large portion of the problem is that Native people aren’t considered “human enough” to be invited into important, or even everyday, conversations. This can be seen in many different realms of life according to Lowry but very clearly when watching sports.

He said even when other team names equate to human beings, such as the Minnesota Vikings, the mascot names always boil down to occupations or other markers that don’t indicate an inherent descriptor such as “Chiefs.”

Lowry noted although Washington changed the name of their mascot, the team colors remain the same. Therefore making it possible, he says, to ignore the change in name altogether as the fans haven’t stopped cheering under the same burgundy and gold.

Shawna Newcomb, a member of the Mashpee Wampanoag Tribe and local school teacher, said her experience with Native mascots started during her childhood on the South Shore.

“As a student growing up on the South Shore, I was ashamed of my Native heritage because the only representation of my heritage was our high school’s rivals, The Braintree Wamps, whose mascot was a Native person’s head with a headdress,” she said. “Since I did not look like that image, it made me feel less Native American.”

Both Newcomb and Lowry cited psychological studies that concluded the presence of Native mascots affect the mental health of Native youth.

One study from 2020 concluded that Native mascots were “psychologically detrimental” to Native students. Furthermore, they increase negative stereotyping of Native people, the study said.

Another from 2005 said Native mascots appear “to have a negative impact on the self-esteem of American Indian children.”

Newcomb said she is starting to see some changes locally. In the Hanover Public School district there was a recent vote on mascots.

“The former mascot was the Hanover “Indian” with a logo that included a Warbonnet [Headdress]. After help from other indigenous voices, the school committee voted to change the mascot,” she said.

And Hanover isn’t the only school to make a change.

Alums of the school Corina Chao and Mary Casey created a petition, which garnered more than 3,600 signatures, and called for Native symbolism to be removed from the school and spurred on a change, according to reporting by Sea Coast Online.

A year later, Amesbury High School voted to change their mascot from the “Indians” to a new moniker, however, they have yet to announce a replacement. This came after a 2016 appeal to change the mascot which was shot down, according to reporting by Newburyport’s The Daily News.

But despite these campaigns, some high schools are not letting go of their Native mascots.

Agawam High School’s athletics team mascot is the profile of a Native person wearing a pseudo-headdress containing the words “AGAWAM” filling the space where the headdress would be.

The team’s name is the “Agawam Brownies.”

Julia Hall, a 2021 graduate of Agawam High School and current Music Education student at the University of New Hampshire, said the mascot is both inhumane and embarrassing.

“It’s an inhumane mascot because it’s representing someone’s culture. It’s not something that you can be represented as. ‘Brownies’ is just racist, I don’t think there’s any way to sugarcoat it,” she said.

She went on to say that because she was a member of the school’s marching band she saw the reaction of the opposing stands when the team was introduced.

“Seeing the team going up was embarrassing honestly, when they introduced the names, because [you could] see people look at each other…it was embarrassing for me to have to be introduced as that and tell people that that was the symbol we were using — reasoning for ourselves.”

During her early high school years she said the marching band rid itself of the name the “Marching Mohawks.” Mohawk is the name of a North American Native tribe. Since the change, the band is simply known as the Agawam High School Marching Band.

But overall at the school, she found there was a large population of people who didn’t “think twice” about their sports team’s icon.

Twitter user Alex King, another alumnus of AHS, posted his view on the school’s mascot.

“I was a swimmer for the Agawam, and we would make brownies for the opposing team in order to divert attention from our blatantly racist name,” he wrote in the thread.

In 2020, the Agawam Town Council voted to keep the Agawam sports team name and mascot logo, according to reporting by the Hampden Daily Voice.

The vote was spurred by a petition with 1,500 signatures asking for a change to the mascot.

And Agawam isn’t alone. Massachusetts has a total of 23 high schools with Native mascot names or iconography, according to the New England Anti-Mascot Coalition.

However, in opposition to the rhetoric coming from the majority of the Native community, Aquinnah Wampanoag tribe member Clyde Andrews told WBZ that Dartmouth High School’s Native mascot “pays homage to the Native Americans who walked this land.”

Dartmouth’s mascot’s name is the Indians. The logo is a Native person’s profile painted in green.

Another Aquinnah Wampanoag tribe member said the difference between an acceptable Native mascot and one that is disrespectful, like the Cleveland Indians, is the imagery.

“In Cleveland,” says Aquinnah Wampanoag tribe member Sean Carney, “you had a very caricature-like rendering of a Plains Indian that really didn’t respect the culture.”

However, Carney believes the icon used to represent the school, because it’s not a caricature, should be viewed through a different lens.

“In Dartmouth, you have a very historically accurate depiction of an eastern woodlands Indian,” Carney explains. “And the name ‘Indian’ is not offensive on its face.”

United American Indians of New England are currently working towards a bill in Massachusetts that, if passed, would ban Native mascots in the state.

“Native Mascots do not bring honor to Native Americans, instead it makes a mockery of our cultures and we are asking to be heard,” said Newcomb. “Unfortunately not every district chooses the right side of history which is why a law must be passed.” 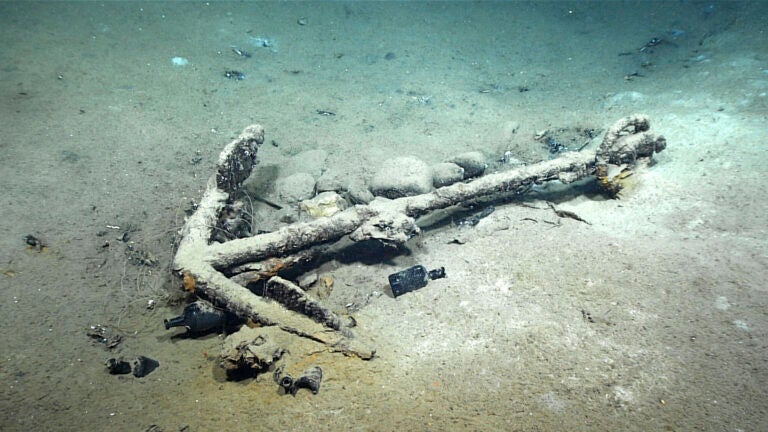