With about seven hours of work and more than 40 focused volunteers, staff members, and experts, seven stranded dolphins were rescued from the Herring River in Wellfleet earlier this week.

The animals were first spotted around 7 a.m. Wednesday morning. Initially, photos suggested there were at least three dolphins stranded. But, it was later determined there were seven spread out over the gut of the river, according to the International Fund for Animal Welfare (IFAW).

After receiving a hotline tip about the stranded animals, local experts from IFAW mobilized a large crew to rescue the stranded Atlantic white-sided dolphins.

The animals came in at about six to eight feet long, weighing, at maximum, about 250 pounds.

“It’s kind of a mad dash of figuring out what’s going on while also trying to get our staff in,” Olivia Guerra, an animal rescue responder and stranding biologist, told Boston.com. “It’s kind of wake up and go.”

As volunteers and staff amassed at the Herring River gut, they spread out and started working with each dolphin. IFAW decided to relocate the animals instead of just refloating them, so the rescuers had to lift the large animals on specialized stretchers.

“They almost look like tarps but with holes for their pectoral flippers and they have really nice handles on either side so that we can line up depending on the size of the animal and the size of the stretcher, anywhere from six to 15 people,” Guerra said. “It helps support the animal safely and as comfortably as possible for them. Those animals are so stocky and are so strong, and they’re so heavy that without those without stretchers we wouldn’t be able to do anything with them.”

On the whole, the dolphins appeared alert and in good health, according to IFAW.

The responders lifted the animals out and carried them to transportation vehicles.

“We have our mobile dolphin rescue clinic which is our primary response vehicle for stranded dolphins,” Guerra said. “But these Atlantic white-sided dolphins are typically larger than the usual species that we see, so all seven could not fit in that vehicle. We have a secondary trailer that we’ll use to help so that we can transport all of them at one time, so that we don’t have to go back and forth to the stranding site.”

The whole operation was done racing against the clock. The rescuers were at the mercy of the tides, which can make the work much harder.

Experts at IFAW provided care to the animals to help counteract the shock of stranding, including injections of vitamin E with selenium, Guerra said. The team also used cooling blankets to help maintain a healthy body temperature, according to IFAW.

Eventually, the animals were all loaded into the transport vehicles and on their way to the spot where they would be released — Herring Cove Beach in Provincetown.

One of the dolphins was fitted with a satellite tracking tag, so IFAW has a general sense of the pod’s movement, and, according to the statement, animal welfare agency is optimistic about the dolphin’s journey ahead.

Guerra said the decision was made to release the dolphins in a different spot since the area where they became stranded in Wellfleet is a “tough area” to navigate because of its shape.

“If they’re already stranded, it’s really hard for them to reorient themselves and get out of that area,” Guerra said. “We want to make sure that we’re giving these animals the best chance possible.”

Cape Cod Bay is a hook, but Wellfleet is “a hook within a hook,” Guerra said. The geography combined with a quick changing tide creates a perfect storm to strand marine animals.

“Cape Cod is a global hotspot for strandings, and it’s been going on for hundreds of years,” Guerra said. “Throughout time, the species of animals have changed or switched based on, I assume, prey shifts and things like that.”

IFAW has had several responses in the last month to situations like this, with a variety of species, Guerra said. The Wednesday rescue was an all hands on deck operation, with IFAW staff, interns, volunteers and AmeriCorps members contributing.

The National Park Service also assisted with crowd management and logistics, according to IFAW.

“We really couldn’t have done it without all of [the rescuers],” Guerra said. “We had about 40 responders. It’s a huge team effort, and it takes a village and it was wonderful to be able to have some people out there to give us a hand.”

If people see a marine mammal, dead or alive, on a beach on Cape Cod, they can call IFAW marine mammal rescue at 508-743-9548, Guerra said. If they are somewhere other than the Cape, she recommended looking up the local stranding response team. 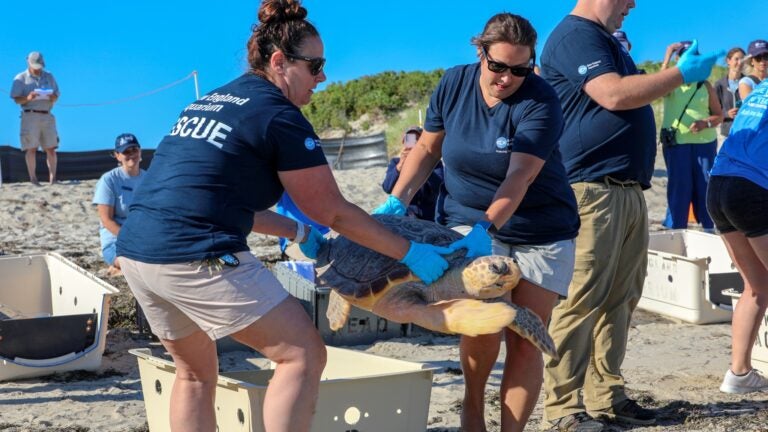