New Hampshire Fish and Game rescued three hikers who were injured Sunday in different parts of the state.

The first call came in to the agency at 12:10 p.m. A local fire department said a hiker was injured at Mount Monadnock State Park, according to a statement.

While hiking the White Dot Trail, according to officials, 71-year-old Sharon Milinsky, of Newton, Massachusetts, fell approximately 20 feet, suffered serious injuries to one side of her body, and fell unconscious.

Park rangers reached Milinsky a short time later and began providing aid, according to the statement. A medical helicopter transported Milinsky to UMass Memorial Medical Center in Worcester, Massachusetts, because of the severity of her injuries and her proximity to the summit of the mountain.

The next call came in at 1:54 p.m., officials said. Susan Carlton, 59, of Manakin-Sabot, Virginia, injured her ankle after falling on the Shelburne Basin Trail in Shelburne, New Hampshire.

Officials said that Carlton was on a short hike to see a waterfall when the dog she was walking pulled on the leash and caused her to lose her footing on slick rocks.

Carlton’s husband tried to help get her off the trail, but determined the injury was too serious for them to leave by themselves, according to the statement. He instead made his way back to the trailhead to call first-responders.

A local campground owner volunteered his UTV and helped Gorham Emergency Services and conservation officers travel the trail to Carlton, officials said. They loaded Carlton on the UTV and drove back to the trailhead where she was taken to Androscoggin Valley Hospital by ambulance for treatment.

The third call came in at 2:15 p.m., officials said. Kelley Hayes, 41, of Nashua, New Hampshire, was hiking with family on Mount Major in Alton, New Hampshire, when she faltered on the trail and suffered an injury that left her unable to hike out.

Hayes was taken to the trailhead by UTV and then taken by ambulance to Laconia Hospital, according to the statement.

To prevent this type of injury from occurring in the future, officials would like to remind hikers to always familiarize themselves with the area they are hiking, have a map for reference, dress appropriately, hike with a partner or group, and carry the necessary equipment. 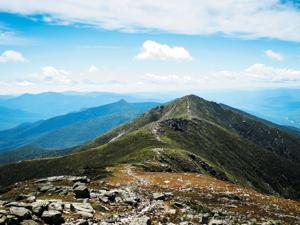