In just a few days, an Emerson College student raised more than $25,000 to support the victims of the shooting in Uvalde, Texas.

How did she raise that money you might ask? By selling t-shirts.

When the newest season of Netflix’s “Stranger Things” launched on Friday, Reagan Allen immediately knew she should recreate the design of the Emerson College shirt that one of the characters, Nancy Wheeler, is seen wearing in the show. The shirt features the Boston school’s long-retired logo from the 1980s, the era that the show is set in.

Social media exploded with posts about Nancy attending Emerson, and Allen, who is from San Antonio, Texas, said she knew she had to make the shirt.

“I had the idea of selling them as a fundraiser for Uvalde because that’s what I’ve been thinking about all week,” Allen told Boston.com. “It seems like the obvious place to donate the money.”

The rising senior, who is majoring in writing, literature and publishing, knew there would be interest in the shirt design for a few reasons, first being the popularity of the show and the second because Emerson students frequently wish for better merchandise options.

Allen made the design and opened sales on Saturday, hosting the fundraiser on a platform called Bonfire, which allows people to design and sell custom shirts.

Sales quickly took off, at one point raising more than $1,000 in about 20 minutes.

“I had no idea that it would get this type of response,” Allen said on Tuesday. “It’s just been a whirlwind weekend for me.”

The link to buy shirts was shared on various social media platforms and Facebook groups, including the Emerson alumni page and the incoming freshman class page. Allen said she was blown away by the support she got from both within the Emerson community and from other people.

“It got posted on the Emerson Class of 2026 page and so many freshmen had reached out to me saying they’re so excited about this fundraiser, that they’re so excited to enter a community of people that are so supportive, so fiercely of something like this,” Allen said. “That to me has been the most rewarding thing about this, getting to talk to people just about how excited they are about the impact of this campaign.”

Before shutting down shirt sales on Tuesday to donate the money raised, Allen sold 2,275 shirts.

“It’s gonna feel crazy to see people wearing the shirts around Emerson and around Boston,” Allen said. “So many people have reached out to me saying, ‘Oh, I don’t know anything about Emerson but I love this fundraiser that you’re doing. I just bought shirts.’ People are gonna be wearing Emerson shirts, who have no idea about the college, which is so funny to me.”

Allen said she was excited when the fundraiser reached 50 shirts and raised $1,000, and was surprised how many people it reached. In total, the fundraiser raised $25,506, which will be donated to a GoFundMe run by VictimsFirst, a network of families of survivors and victims of mass shootings over the last two decades. Already, the GoFundMe has raised more than $5 million that will be directly redistributed to those impacted by the shooting that killed 19 children and two teachers at Uvalde’s Robb Elementary School.

Allen said she has driven through the Uvalde many times and felt moved to give back. She said the t-shirt campaign showed her how much of an impact one person can have.

All it took was a few design skills to replicate the shirts and then a platform to sell them on.

“[After tragedies like this] you feel frustrated because you feel like you can’t make tangible actionable change, like you just feel kind of at the mercy of legislators and the government that you’re frustrated with,” Allen said. “This whole campaign has really showed me the power of a person with Adobe Creative Cloud. I never felt super like I had the capacity to do something like this. And this has showed me that anyone can do something like this.” 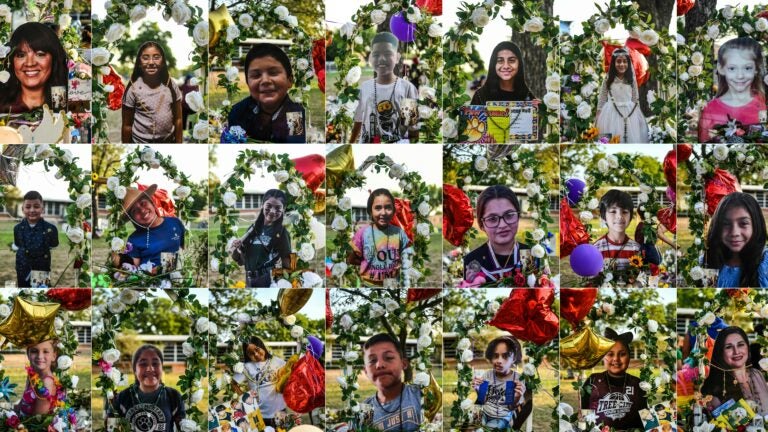 ‘She was my sweet girl’: Remembering the victims of the Uvalde shooting