To help heal a wound that almost cost a man his life, doctors and staff at Tufts Medical Center turned to a method often used long ago, but is unusual today: maggot therapy.

It was a last-ditch effort to heal a large ulcer on a man’s backside that had gotten progressively worse despite doctors’ surgical efforts to remove dead tissue and help it to heal. The infection was also resistant to many antibiotics.

“It was a huge team effort,” Dr. Frederick Gale, who works in surgery and wound care at Tufts, told Boston.com.

The wound, he described, was “too severe” for the patient to undergo more operations, Gale said.

Hospice was seemingly the next stop, but the patient wasn’t ready to go, Lisa Baxter, clinical director of the inpatient wound and ostomy team at Tufts, told Boston.com.

“He really challenged us to find a solution,” she said.

Gale said he consulted Dr. Ron Sherman, who specializes in maggot therapy. Roughly 3,000 maggots were brought in. The type used are sterile, and only eat dead tissue.

The maggots were applied and secured with a “caged dressing,” which helps to keep them in place, but allows them to breathe. When the maggots have had their fill, they actually leave the area, making them easy to remove.

Tufts had only done one maggot therapy before.

“And the first case was nothing like the magnitude of this,” Gale said.

Along with eating away the dead tissue, the maggots help to “stimulate granulation tissue,” according to Gale. He said this tissue is filled with new blood vessels, which turn a wound into a site of healing.

“Within a couple of days, the wound had a completely different personality,” Gale said. It was a complicated wound, he noted, describing it as cavernous, with areas medical teams couldn’t see very well.

“That’s part of why we needed the maggots,” he said. “They go where the food is. They’re having a great time taking care of it.”

That isn’t to say that one should go digging in the forest for maggots to treat wounds, according to Gale and Baxter. They don’t work the same way that medical-grade maggots do. They aren’t sterile, and this specific type of maggot only eats dead tissue.

It took the whole team to make this work, Gale said, from helping the man take in calories by treating him to an ice cream, to the team just taking care of him, cleaning his face and fingernails.

Larry, the patient, is now recovering from his ordeal.

“What could I say?” Larry asked while he was interviewed by WCVB. “I was the one who pushed them into finding another solution, so I can’t say no. The fact that they were thrilled with my progress meant whatever they were seeing was going away and I’m getting better. That was probably about the happiest time I had in the hospital.”

The maggots did what modern medicine couldn’t, according to Gale.

“This is a time when those things were not the right answer,” he said. “We consulted the maggots and the maggots saved his life.” 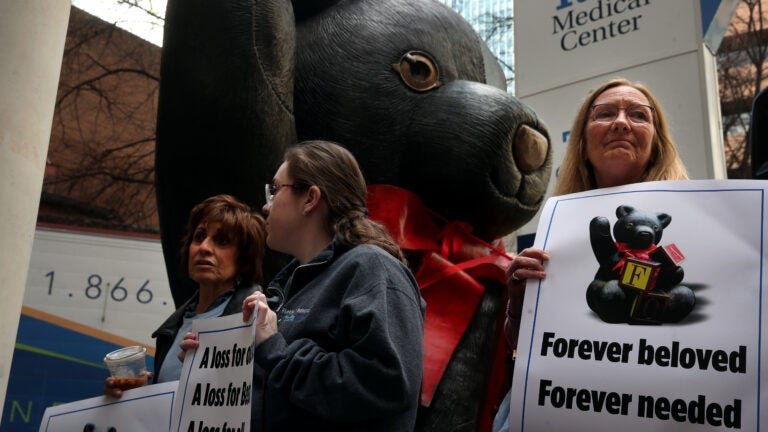