A simple social media post combined with the right circumstances led to a four-way kidney swap at Tufts Medical Center earlier this year.

Courtney Martin was sitting at her orthopedic doctor’s office for a running injury when she happened to open Facebook.

“I picked up my phone to call my husband and I had been perusing social media and the page refreshed and it was a girlfriend of mine who I formerly worked with and there was a photo of him — and it wasn’t her — and I read the story, and I felt like at that moment time stopped and it was like everything in my world had been converging to this point,” Martin told Boston.com.

The story she had stumbled upon was that of Eric Jenson. A friend of Martin’s had posted on Facebook because Jenson had been put on the list for a kidney transplant and was looking for a donor.

Martin, who described herself as having a “bleeding heart” and always wanting to help, felt called to at least try to help Jenson. Her plans to run the Chicago Marathon were on hold due to the hip injury, so she had the time. Quickly, she got in contact with Tufts Medical Center to see what she could do.

“I called my husband on the way home, and he said ‘What’s going on with the hip? What’s happening? Are we doing this? Are we going to Chicago?’ and I said, ‘We’re not going to Chicago, but I am going to donate my kidney to somebody.’ And there was silence. He’s like, ‘OK, well, we’ll talk about when I get home,’ and I go, ‘I’ve already made the call,’” Martin said.

After filling out an online application, Martin said she got a call from the hospital immediately and then went through all the testing and preparation to make sure she was a good candidate to do a live kidney donation.

“I had told the doctor, I was like, ‘I don’t know how many other people you have for Eric,’ but I was like, ‘You will not find a kidney better than mine,’” Martin said. “I’m an athlete. I eat healthy. … And thankfully that really was the case. Thankfully, they came back and they were like, ‘That is a top notch kidney.’”

Dr. Ashtar Chami, the medical director of kidney transplantation at Tufts Medical Center, said there are a handful of criteria to be considered a viable donor including overall good health, a certain level of kidney function, and compatibility with the intended recipient.

Martin said she really felt moved to help Jenson because of the parallels in their lives.

The pair were well on their way to setting up the donation for later in the year when Martin got another call from the hospital. Because of Martin’s blood type, her kidney was viable for more people, including another person waiting a transplant through Tufts Medical Center.

Martin said she didn’t get much information during that initial call, except that with a change of plans her donation could help facilitate donations for two people instead of just one.

“Tufts calls, and they are like ‘We have a situation.’ … So I go ‘OK, well, what’s the situation?,’ and she goes, ‘This is all of the information I can give you. There’s another pair at the hospital. They are not a blood match, but you are a blood match to the recipient and his donor is a blood match to Eric. Do you want to help?’” Martin recalled. “I was like, ‘Let me speak with Eric,’ because I don’t want him to think that I’m ditching him going off. So I called Eric and he was on the same exact page. He’s like, ‘If we can help two people, why would we not do that.’”

The other pair was a brother duo — a man named Dan was in need of a kidney, and while his brother was willing to donate, they weren’t compatible.

“We thought, you know, since Courtney doesn’t know Eric, personally very well, this way she could help two people, not just one,” Chami said. “When someone is a kidney donor and they donate a kidney, it’s a gift. We wanted to try to maximize that gift and help more people instead of just helping Eric.”

“When you think about kidney donation, you really want to be fair when you do the swaps. You don’t want to give a really, like a much older kidney to someone younger, … so because the brothers were also very young and because she could donate to the brother, we thought about that,” Chami said.

If the brothers had instead been put on a kidney swapping registry, a transplant likely would have come eventually, but it may have been much later and Dan may have had to start dialysis before receiving a donation.

Swaps like this aren’t uncommon, Chami said, but what is unique about this situation is a direct donor, Martin in this case, opting to donate to someone else to facilitate another donation.

“You can imagine if it’s a brother donating to a sister, it is going to be hard for us to approach them and say, ‘Hey, don’t donate your sister, even though you’re compatible, and go donate to some random stranger,’” Chami said. “That’s why specifically we chose Courtney and Eric and we chose the brothers because she didn’t know him well. But I feel like she would have done that regardless, just given who she is as a person.”

All four people agreed to the switch, and all went in for surgery the same day.

Kidney donation surgery is a relatively safe procedure, Chami said. Some patients are pain free in just days, and most patients don’t have any pain by a few weeks post operation, he said. Martin said she is back to feeling normal and had an easy surgery and recovery.

The four involved in the kidney swap are still in touch with each other, Martin said.

“Shortly after surgery I was able to connect with Dan’s mom. I think in that moment, reading her text, I think that’s when it hit me. It was never a big deal to me. And because she was so grateful and so sweet and so appreciative, mom to mom, I realized this really was a big deal,” Martin said.

“What’s important about people considering living donation is that there’s approximately 100,000 people waiting on the transplant list. So there’s a lot of people suffering while they’re on dialysis, or while they’re waiting for a kidney transplant,” he said.

Martin encouraged people to check if they are a good candidate to do a live kidney donation. Tufts Medical Center has an online application that people can do to get started, she said.

“If this is something that speaks to you, if you are moved by it, call the hospitals directly. The great thing about Boston is we’re in the best medical capital of the United States. Every single hospital has a living donor website,” she said.

Usually expenses to the donor are minimal, Chami said, because the donor charges are covered by the recipient’s insurance. Some states, including Massachusetts, also have tax deductions for kidney donors, he said.

Chami emphasized that donors can back out at any point in the process, even right before they go under anesthesia for the surgery.

“Our biggest thing when we evaluate a kidney donor is we want to make sure we don’t put them at risk. In medicine it’s always first, do no harm,” Chami said. “Somebody’s coming forward to give this incredible altruistic gift, the one thing we want to make sure is that they’re safe.”

Martin said she hopes her son can look back on this and remember that, as Mr. Rogers would say, you have to look for the helpers, and sometimes, you have to be the helper.

“I have a 5-year-old son, and I say something to him every morning before he leaves for school. First I say, ‘Lead with kindness,’ then I say, ‘Treat others,’ and he always says, ‘The way we want to be treated.’ So if there’s no action behind those words, right, what is the point?” Martin said.  “I really want him to know that when mommy and daddy say stuff to you like how we treat others the way we want to be treated, sometimes you have to take that action.” 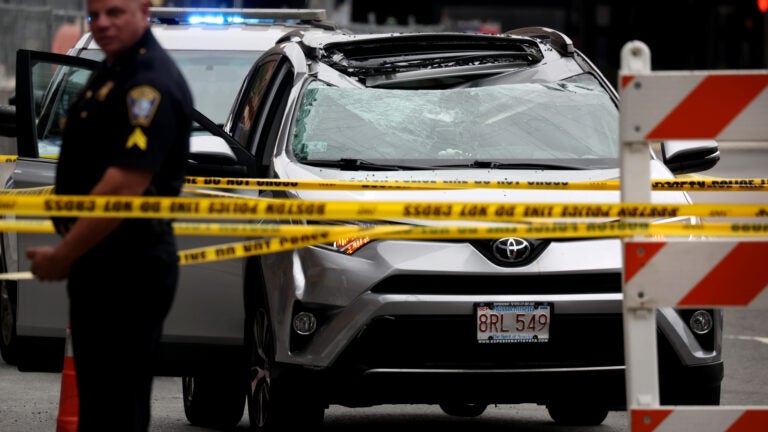