Police in Chatham are investigating the distribution of antisemitic flyers, according to a statement posted on Facebook Tuesday.

The flyers were found along Stage Harbor Road and Bridge Street inside plastic bags with rocks for weight. Police said they appeared to have been randomly dropped, or perhaps thrown from a vehicle. No specific person or location has been identified as the sole target, according to the statement.

A message on the bottom of the flyers claims that they were “distributed randomly without malicious intent.”

The investigation by Chatham police indicates that these specific flyers were distributed in other Massachusetts towns and in other states recently.

The flyers appear to be from the antisemitic group The Goyim Defense League. Police posted an edited image of a flyer on Facebook, which espoused antisemitic conspiracy theories about the media.

“The Chatham Police Department takes these types of incidents seriously and will exhaust all resources to identify those responsible,” the statement read.

The same hate group reportedly dropped similar flyers in Peabody earlier this month, according to The Boston Globe. In that incident, people also found flyers scattered on street curbs and sidewalks. The Peabody flyers were dropped close to the beginning of the Jewish holiday Shavuot, which celebrates the revelation of the Torah to Moses on Mount Sinai.

Chatham police said that the group behind the flyers aims “to cast aspersions on Jews and spread antisemitic myths and conspiracy theories.”

Roadside flyer drops like those seen in Peabody and Chatham are a common tactic by the Goyim Defense League.

“It looks like it’s the Goyim Defense League, which is a network of antisemitic provocateurs,” Robert Trestan, executive director of the Anti-Defamation League in New England, told the Globe. “This is one of their action items… they go around and spread antisemitism through these flyers.”

The group was responsible for at least 74 antisemitic propaganda incidents in 2021, including a nationwide campaign last December, according to the ADL. Their propaganda has been spotted in 17 states this year.

Based in California, the Goyim Defense League parodies the ADL’s name and logo. Members of the group have spread antisemitic conspiracy theories claiming Jews were responsible for the 9/11 terrorist attack, and “control” institutions like the media, economy and the American government, according to the ADL.

Antisemitic incidents in Massachusetts spiked in 2021, reaching an all-time high, according to an ADL report. There was a 48 percent increase in such incidents, which included the stabbing of a rabbi in Brighton.

The incident in Chatham comes on the heels of a march through Boston by white supremacist group Patriot Front on Saturday. That group allegedly attacked a Black activist near Copley Square.

Chatham police are asking residents who live near locations where the flyers were found to review any outside surveillance cameras. Residents should look to see if any vehicles or people dropped objects between 9 p.m. Monday and Tuesday morning. 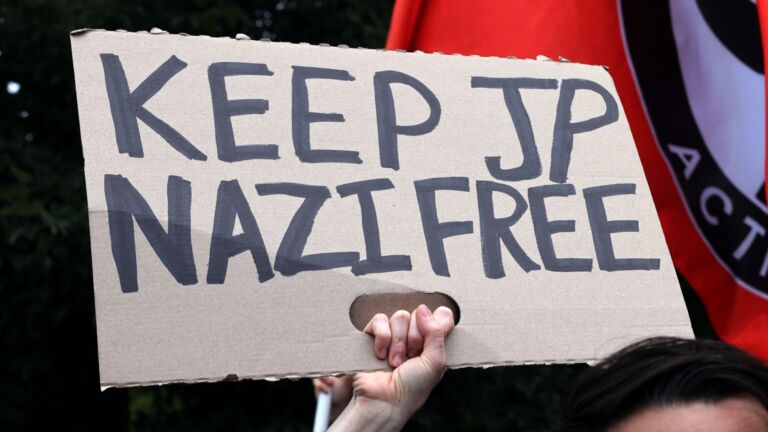 Neo-Nazi activity is increasing in Boston. Here’s a timeline of recent events.