Crews are preparing to resume work demolishing the Government Center Garage, which has been halted since a fatal collapse in late March, and will soon close the busy street below for the rest of the summer. Beginning July 11, Congress Street from New Chardon Road to Sudbury Street will be closed to traffic, the city said Tuesday, with detours for vehicles, bicycles and pedestrians. Construction crews hope to finish the phase of work that requires shutting down the street underneath the massive concrete structure, where Merrimac Street changes to Congress Street, by Labor Day.

Taking down a portion of the Government Center Garage over the busy roadway is the key next step to The HYM Investment Group’s multi-billion-dollar Bulfinch Crossing mixed-use development. Residential tower The Sudbury has already opened, while interior work continues at One Congress, the $1.3 billion office tower that will be the headquarters of State Street Corp., InterSystems and K&L Gates when complete. Both those buildings are built around and on top of a portion of the garage which will stay. The rest — over Congress Street and the former Haymarket bus depot — will come down to make way for a 410,000-square-foot laboratory building.

The March collapse and last month’s multi-day shutdown of the Green and Orange Lines below have raised safety concerns, but the street closure is “part of scheduled work,” HYM said in a statement Tuesday. The developer, along with its Washington, D.C.-based financial partner National Real Estate Advisors, general contractor John Moriarty and Associates and other project partners “have been and continue to be in coordination and communication with all critical state, city, local and transit entities and officials,” HYM said. 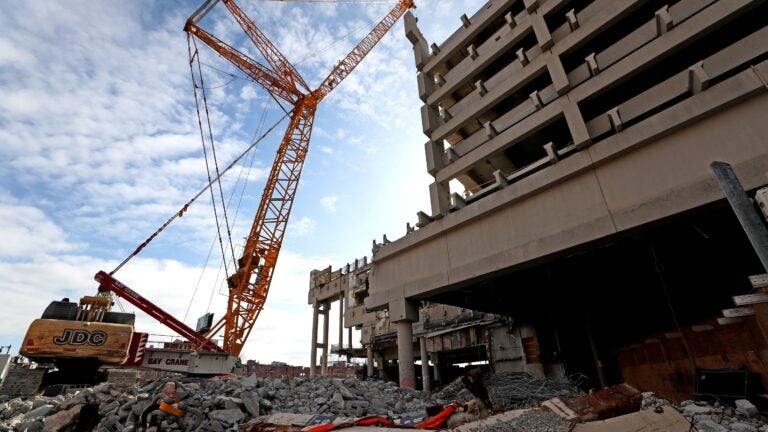