Ipswich police said Wednesday they are investigating neo-Nazi group flyers that have been found in yards throughout Ipswich and a neighboring town.

“We are actively investigating this matter and are asking residents to assist us in identifying those who distributed these pamphlets,” Police Chief Paul Nikas said in a news release. “Hatred has no place in Ipswich, where our sense of community is one of our great strengths.”

Ipswich police said they received numerous reports about the flyers. They were found in plastic bags, which also contained rocks, in yards off of several streets in the town over the weekend.

Police said they believe the flyers were thrown from a vehicle, but no residents have reported having contact with the person or group who distributed the flyers.

Police said the flyers appear to be an attempt at recruiting by the Nationalist Social Club (NSC), also known as the “131 Crew.” The Anti-Defamation League (ADL) describes the NSC as a neo-Nazi group with small, autonomous chapters in New England, the United States, and abroad.

Originally named the New England Nationalists Club, the ADL says, the group was started in December 2019 by a handful of neo-Nazis in eastern Massachusetts. It says the group works primarily by spreading antisemitic propaganda online and doing public demonstrations.

Though the NSC is using a similar tactic of leaving flyers in plastic bags with rocks for weight, it is not the group responsible for leaving racist flyers in Chatham that Chatham police said they were investigating on Tuesday.

They are, however, the same neo-Nazi group that flew a “Keep Boston Irish” sign on the sidelines of the St. Patrick’s Day parade in South Boston in March.

The group was also seen gathering at the Park Street MBTA station on May 7, according to Waltham Night’s Watch (WNW), an organization that documents hate groups. WNW said the NSC has been organizing two public actions a month this year after experiencing a spike in membership last fall.

At the same time, antisemitic incidents increased 42% in New England in 2021, according to the ADL.

Ipswich police are asking anyone who found one of these flyers on their property to check their security or door cameras to see if they have any images or video of the people or group who left the flyers behind.

Anyone with information about the flyers is asked to call Ipswich police at 978-356-4343.

“The Town of Ipswich rejects hatred in all of its forms,” Interim Town Manager Mary Gallivan said in the release. “This is a welcoming community where partnerships, diversity, and unity are among what makes this a great place to live. I hope anyone attempting to spread hatred will stay out of our community.” 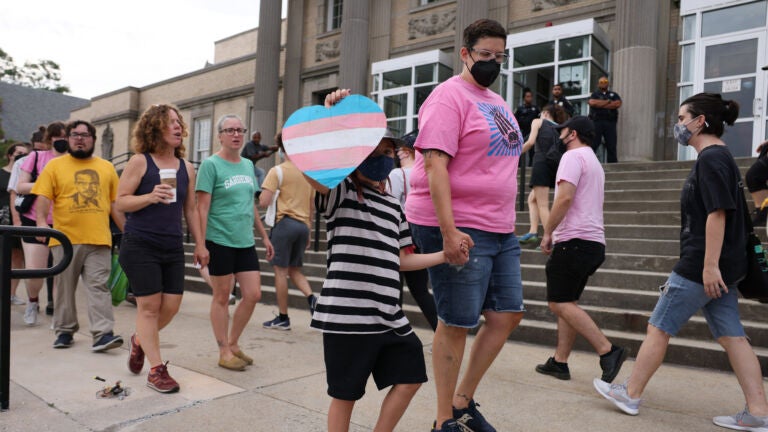