Suffolk County District Attorney Kevin Hayden is calling on officials in states with laws that make it easy to access guns to recognize the impact their lax legislation has on Boston, pointing to the recent weekend of violence in the city that saw at least 10 people shot.

Firearms trafficked from those states are impacting Boston and other cities, Hayden said in a statement on Thursday.

“When more than three out of four guns seized in Boston come from out of state it tells me three things,” he said. “First, gun laws in Massachusetts work well. Second, gun laws in many other states don’t. And third, gun traffickers know which states are easiest for them to amass their murderous inventory and which states are best to sell that inventory.”

Hayden, who was appointed to serve as district attorney when Rachael Rollins departed to serve as U.S. Attorney for Massachusetts earlier this year and is now running to formally take over the position, said Suffolk County is seeing more daylight shootings “on busy streets” and “more guns in the hands of teenagers.”

The district attorney pointed out that on Sunday and Monday alone, police in Boston responded to more than a dozen shootings across the city that left 10 people injured. On Monday, police also seized a .380-cal handgun from a 13-year-old. The next day in Chelsea, two groups of men shot at each other in the parking lot of a McDonald’s in broad daylight, with a bullet narrowly missing a customer in a nearby Dunkin’.

“The common thread, beyond shooters willing to send bullets flying regardless of where they are, is that the guns were likely trafficked in from another state,” Hayden said.

According to Hayden, federal authorities and the DA’s office have collected data that shows in 2021, 63 percent or 271 of the illegal firearms seized in Boston originated in Maine, New Hampshire, Alabama, Georgia, and Florida. An additional 15 percent or 67 guns were traced to other states including Virginia, North Carolina, South Carolina, and Ohio.

Only 23 percent (103 guns) of the seized illegal firearms came from within Massachusetts, according to the DA’s office.

“The cold truth is that more than 75 percent of illegal firearms used in Boston-area crimes originated in another state,” Hayden said. “There’s a lethal river of steel flowing from northern and southern states onto the streets of Boston, and our neighborhoods are suffering from it. When one state’s extreme interpretation of 2nd Amendment rights causes extreme suffering in another state it becomes a problem for all Americans.” 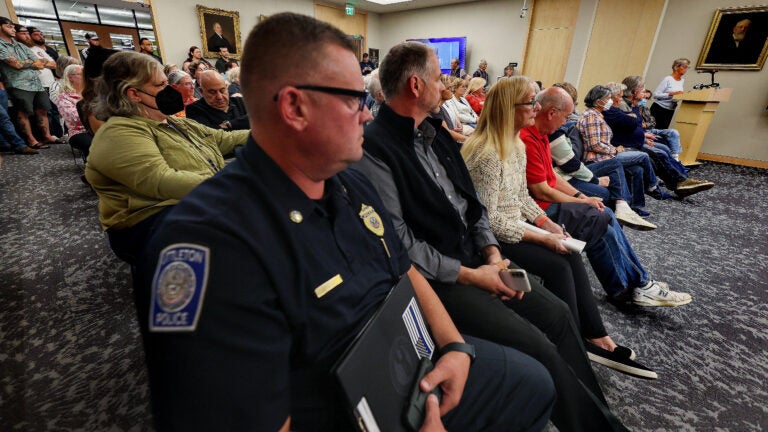